Panama is the last Central American Country before crossing to South America spinning south. There is a significant difference between all Central American Countries and the closer we get to Panama City the more obvious investments in infrastructure, houses and shopping malls becomes. Is it Panamanian money or multi-national?

Biking into Panama City is met with some anxiety, as this is the first big city in a very long time and we have to cross the “Bridge of the Americas” of which we have heard horrible stories.

But first we have to leave La Chorrera and as it is a Sunday we are lucky there are not so many trucks. It is already a bit of a challenge as I navigate on MapOut (is like reading a map) and watch out for the potholes, warn Frank if there are and look in the mirror if I can bypass the obstacles.

Bridge of the Americas.

After some rolling kilometers and a slight climb, we arrive just before the Bridge of the Americas. At our left side there is a viewing point and there seems to be a footpath behind the railing leading over the bridge. Benefit of being on the bike is that you can cross the road, even if illegal. Beautiful view of the bridge and the Panama Canal. 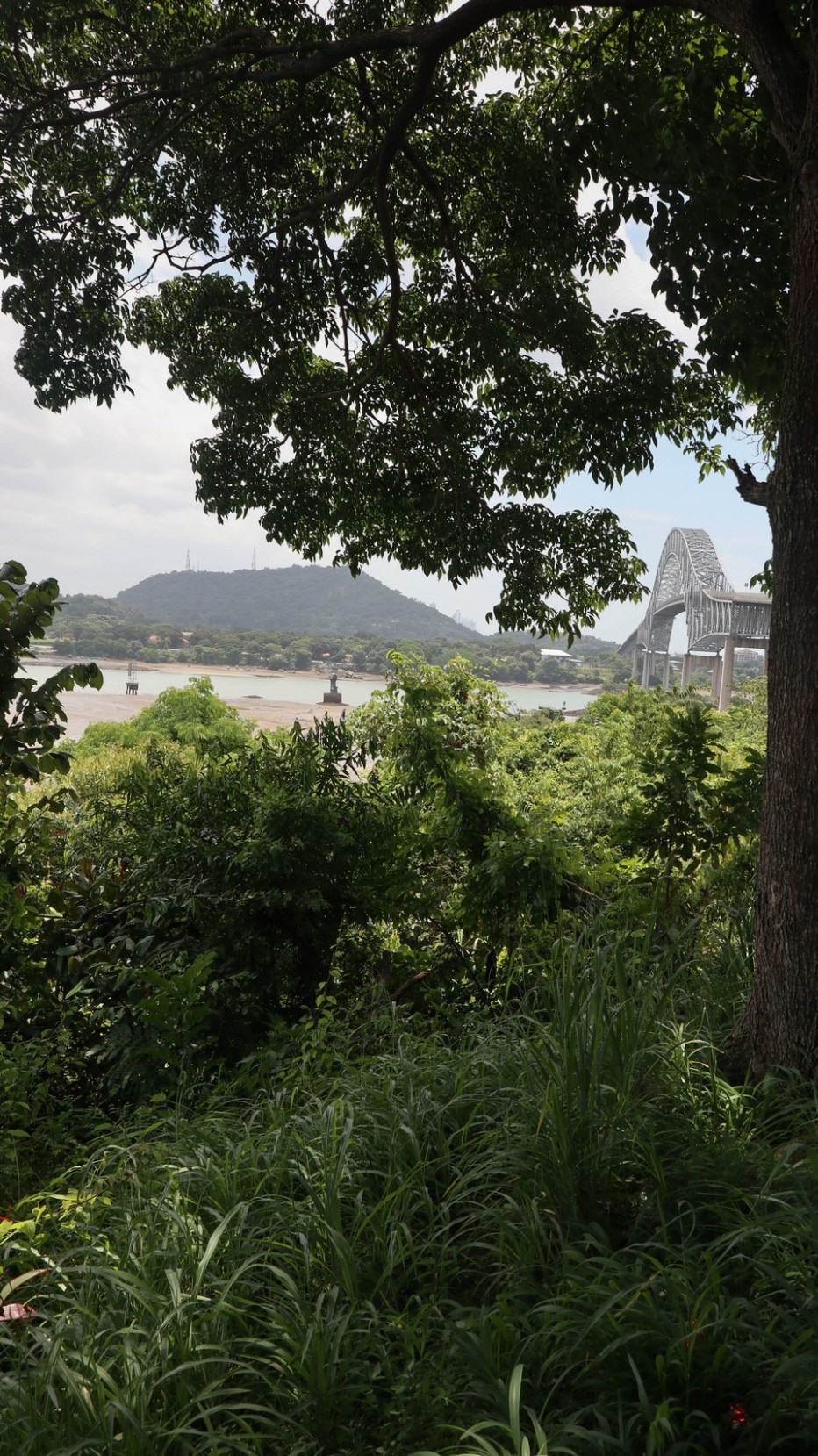 First part crossing is behind the guardrail and we think we have found the perfect solution.

But than the railing disappears and we have to bike against on-coming traffic on a 30 cm high boarder which is just wide enough for our bikes and luggage. It does feel safer than biking on the right side of the road, where there is nothing and not seeing upcoming traffic. Scary as you should not hit the fence on the left side or fall off the side walk, but we have very stable bikes. When we want to have a view of the canal we need to stop and watch as I don’t trust myself looking left and biking at the same time.

Fun video at Instagram @spinningsouth of me crossing the bridge.

We look in the new-old city for a hostel but private rooms are full and there are a lot of drunk people on the street, probably because France won the World Championship.

A devastating contrast between wealthy, very expensive, renovated area on Casco Vejo and two block South, the poorest streets in Panama. Wondering how long these people will be allowed to live here as tourism is taking over this picturesque area. 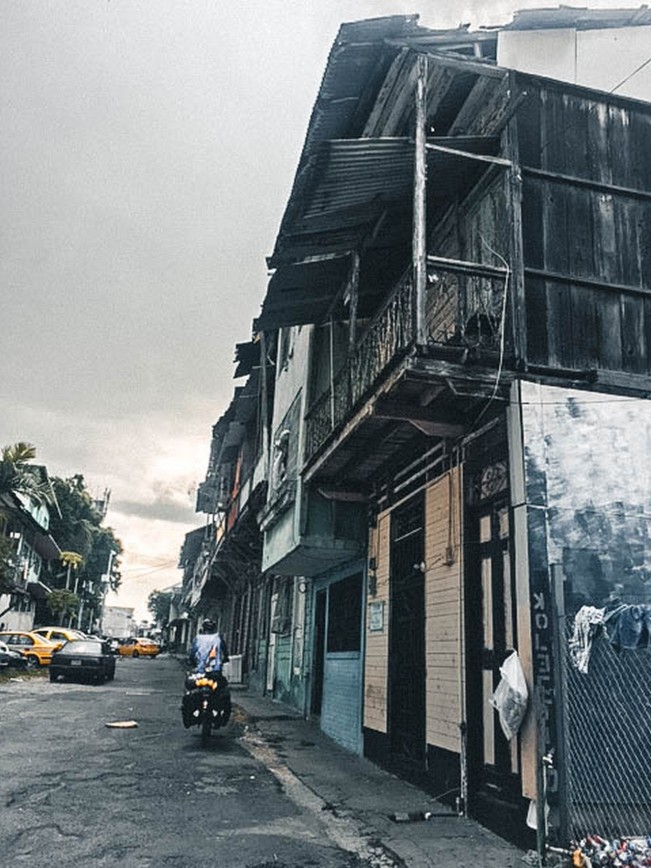 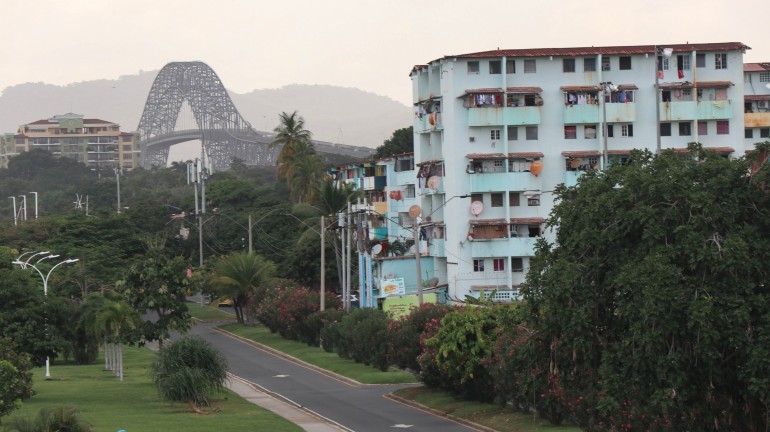 As bikers we can follow the bay and spend quite some time at the mirador overlooking the high-rise skyline of Panama City. We meet Dan, who advises us to consider taking a kidnapping and ransom insurance as we are travelling to South America. 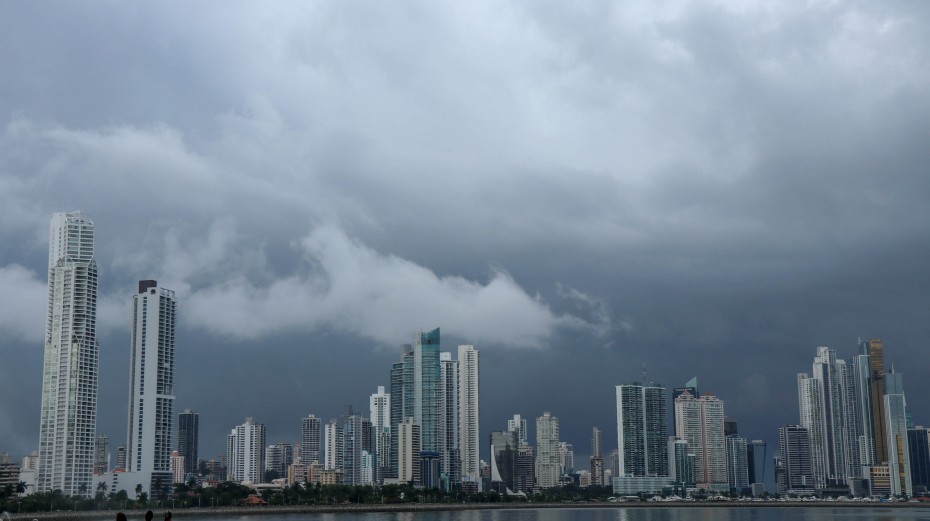 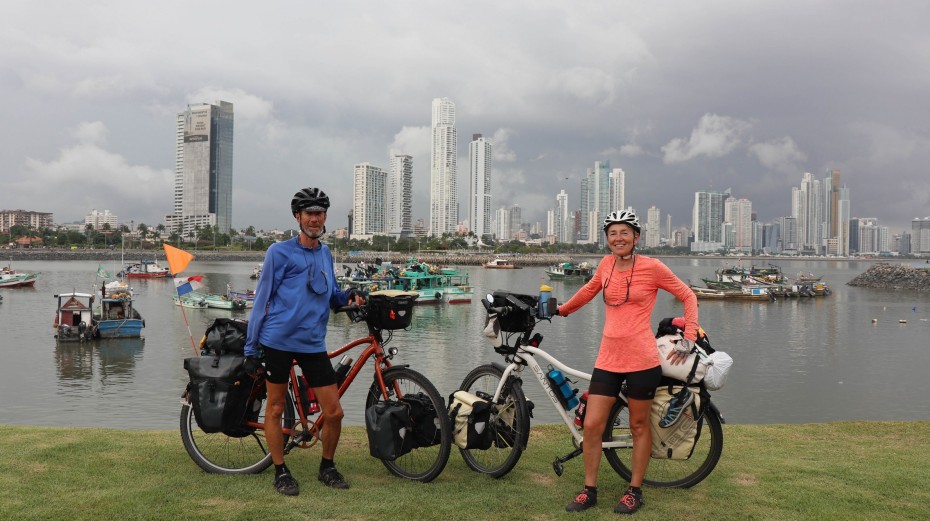 We find Lemon Inn after biking only one short stressful stretch. Think driving is more stressful than biking.

From the Inn we can easily walk to the big shopping mall only the key thing we are looking for is not sold anywhere. Nixwax for our rain jackets. But I do find a long longed for bikini! We have a lovely chat with Franco from the Columbia shop who shares that life in Panama is extremely expensive especially because the average worker earns 550$ per month. 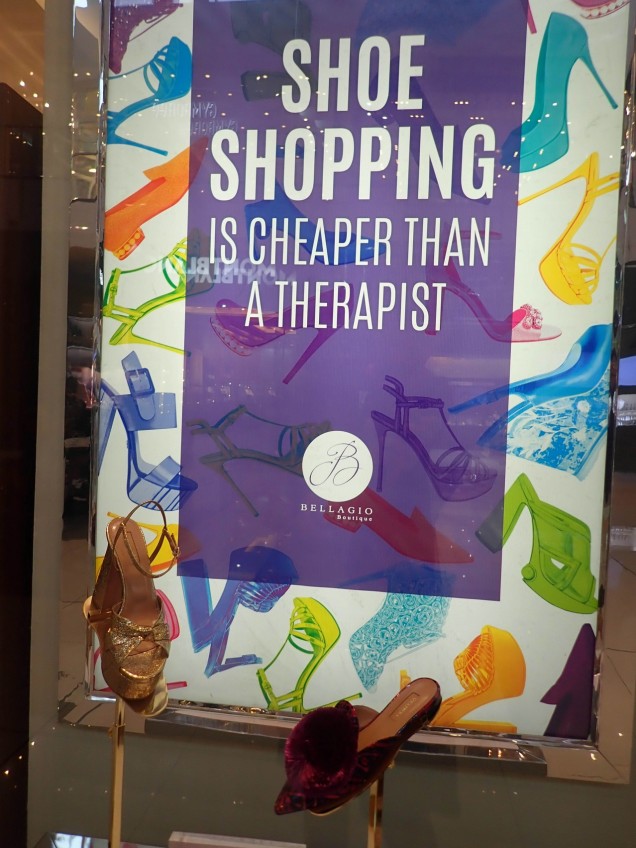 We have contact with Ans and Henk to see if we can visit the Panama canal together. As they only have the 19th available and we need to be at the boat for Colombia we decide to visit together the Gathun locks at the Atlantic Ocean side. We will spend 2 full days in Panama and then bike to Colon. We will now already visit the locks at the Pacific side and they can visit these last day day of their holiday.

Visiting the museum and locks at Miraflores gives insight in the modern world wonder. The Panama Canal was started by the French in 1881 and finished by the Americans in 1914. 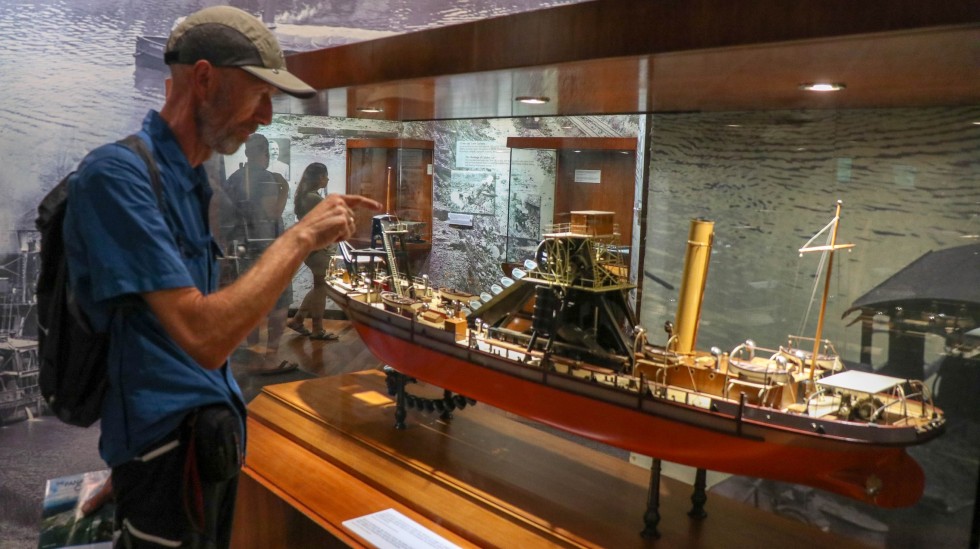 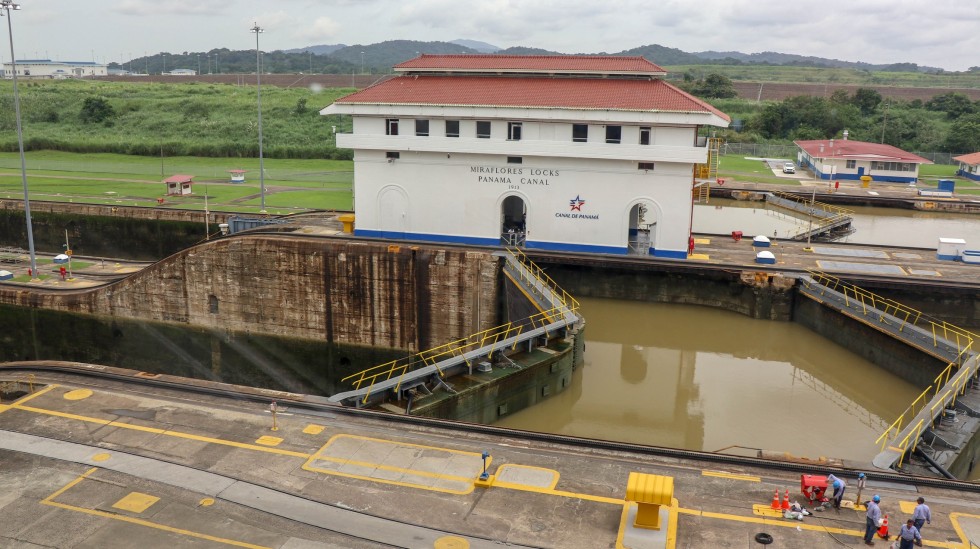 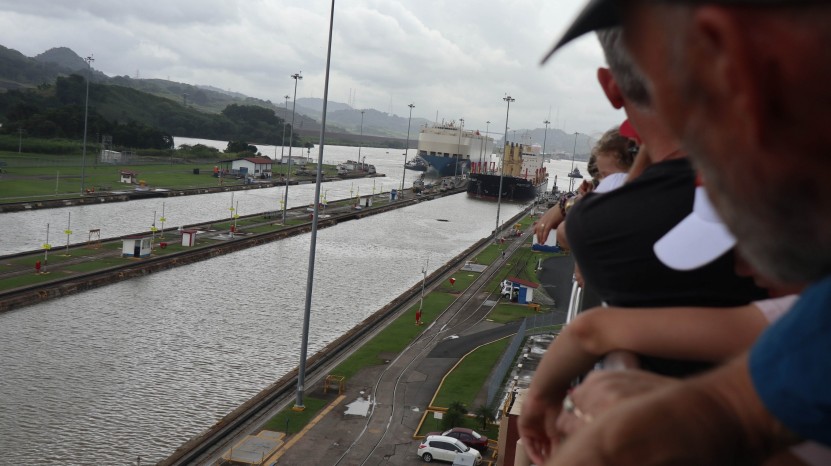 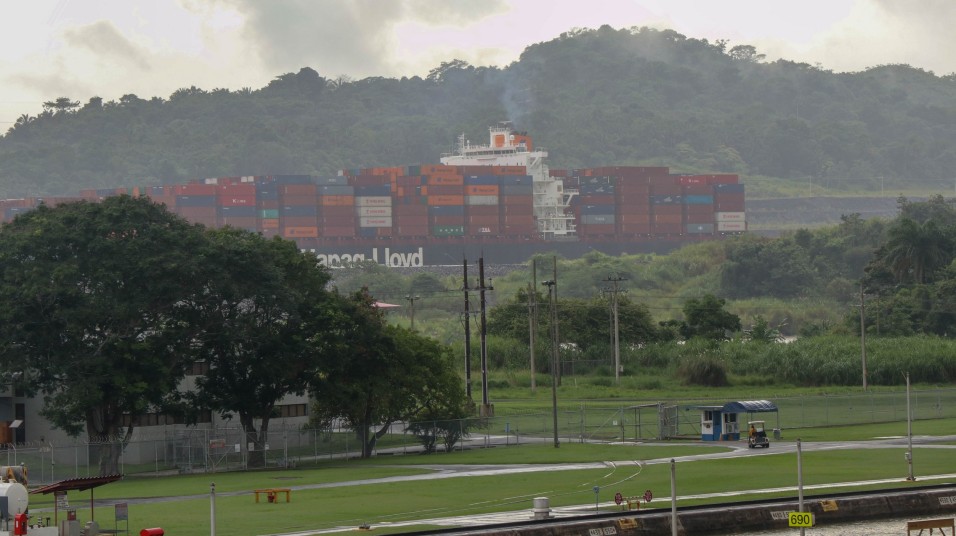 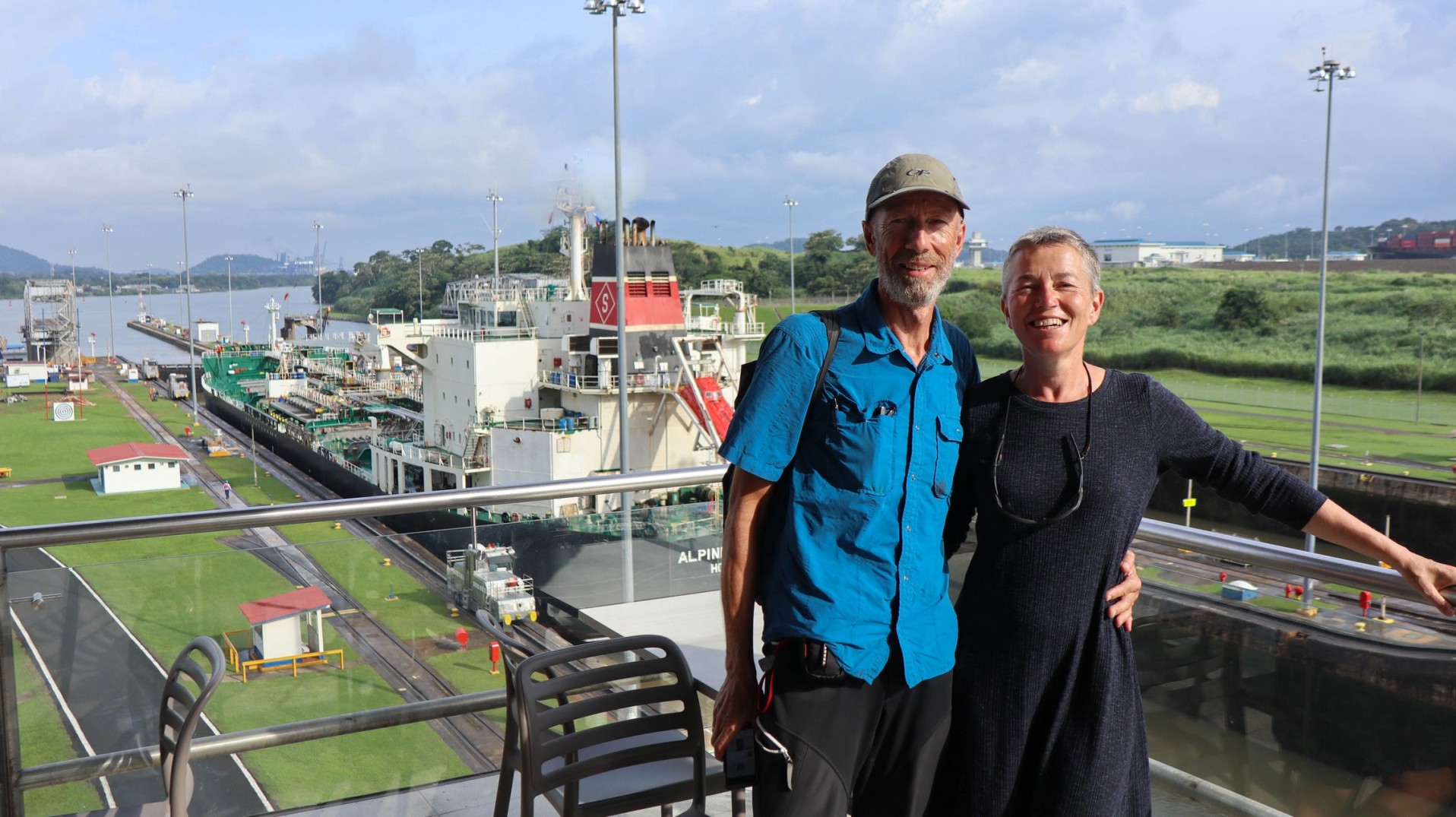 Until 31st of December 1999 USA exploited on a break-even basis. As Panama is now responsible for this wonder they changed it to a profitable income. Average of 40 ships per day, which pay between 200,000 – 800,000$ per transit. With the profit new locks have been build which can accommodate the new mega container ships.

Great read on the Miraflores locks and Panama Canal.

Second day visit of Panama Viejo, the first modern settlement build in 16th century is now world heritage. Due to the relocation of the city end 18th century we are lucky to still see the remainders of the old city. Almost all other big cities are build on previous buildings and you only can see (if lucky) something of what has been. 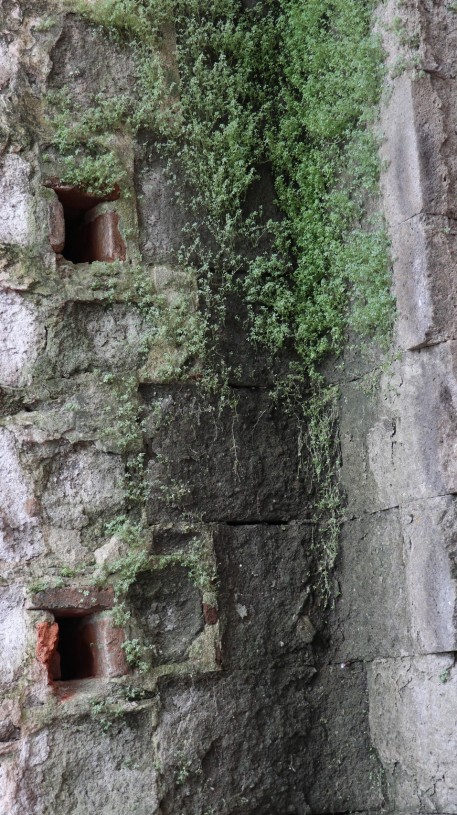 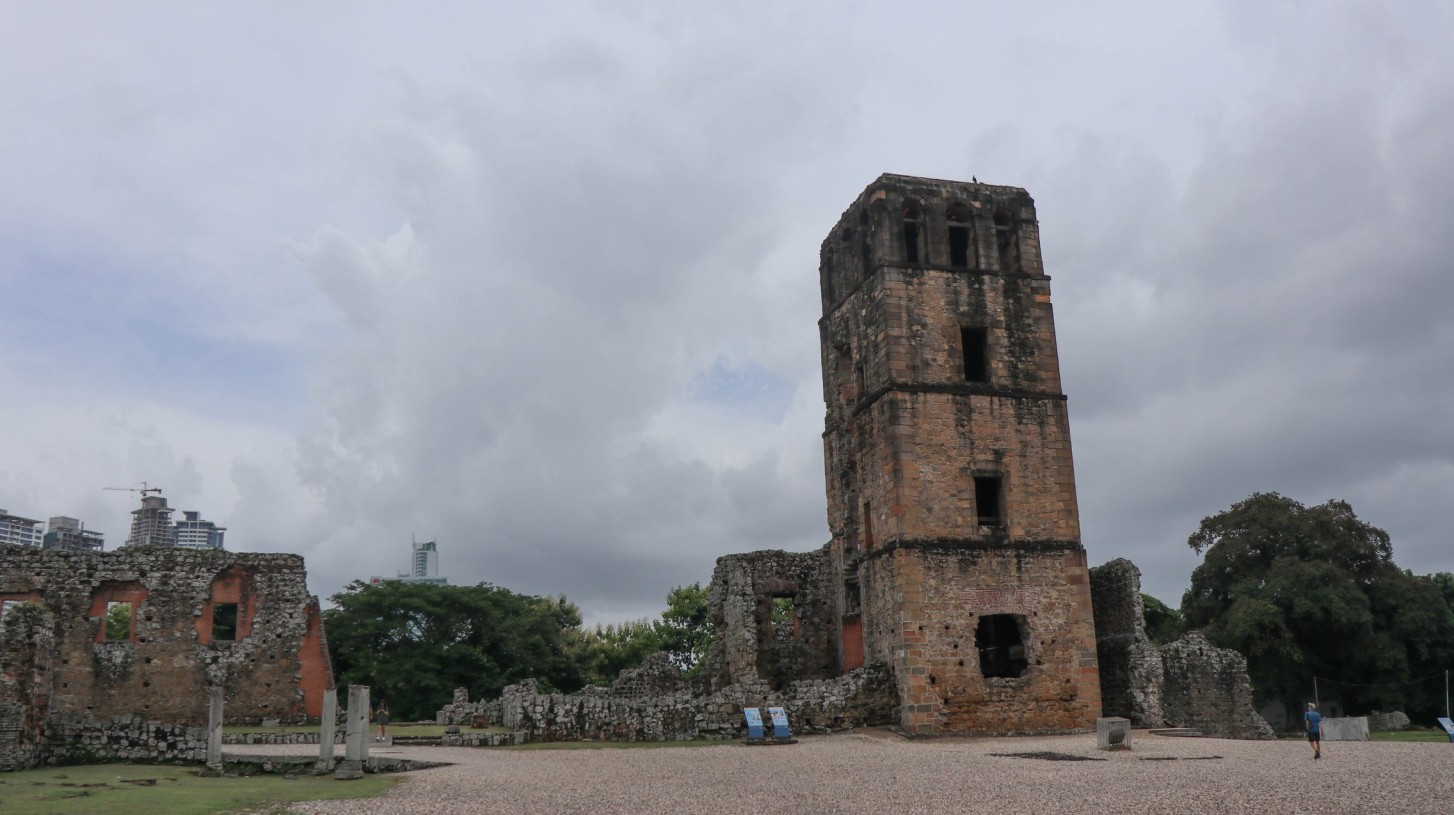 I also want to visit the BioMuseum and underestimate the distance we need to cover by public transport. Nice building, reasonable setup explaining the impact of the creation of the earth bridge, now Panama. As it is already getting late and we are tired we decide head home. 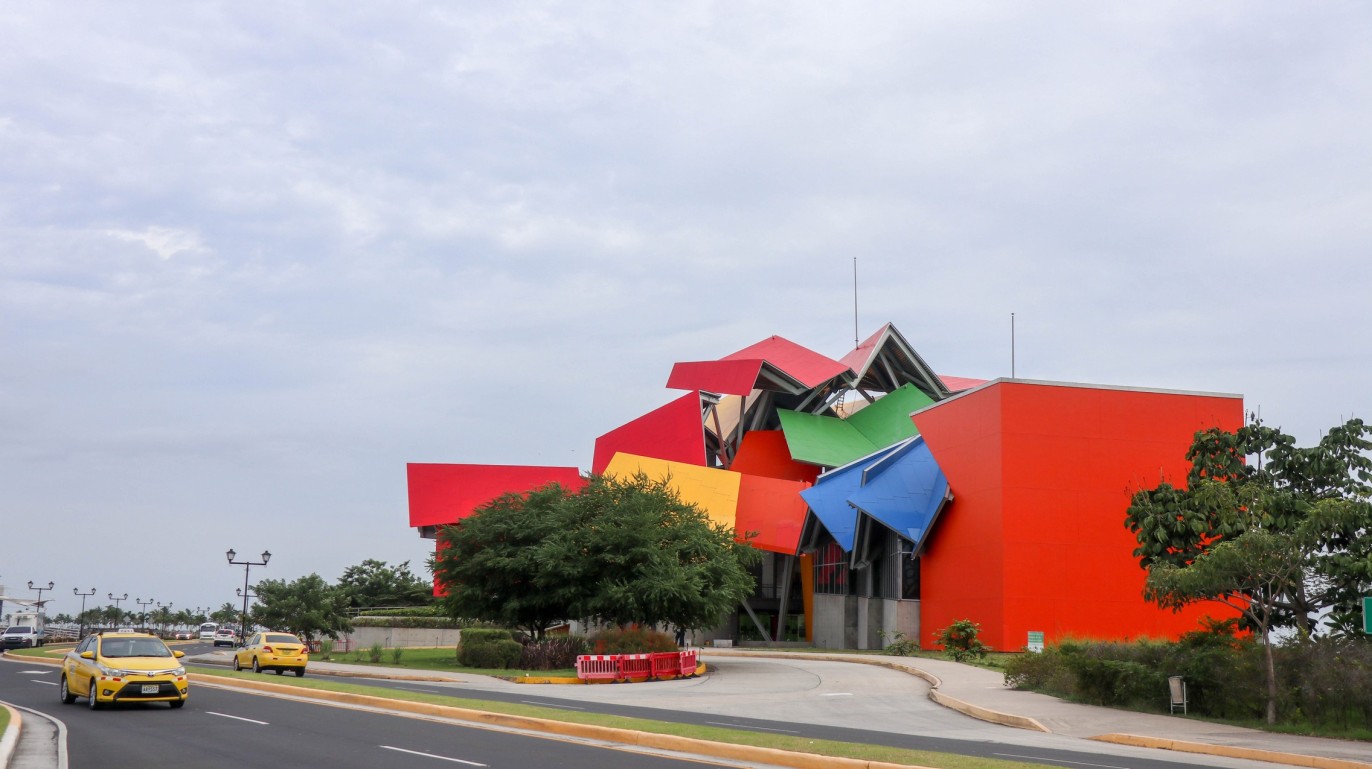 Joy of Lemon Inn is that there is a great supermarket close-by, a reasonable kitchen en no other guests using any of the facilities.

Biking out of Panama City is more of a challenge as we are heading to the Atlantic and have to cross the city. By luck we soon hit the toll road and police lets us biking this stretch. But when we take the direction to Colon on the toll road we are stopped by police who kindly but firmly directs us to the freeway (Libre). What a nightmare. Worst biking in a very long time. Almost no shoulder, bad condition of the road and lots of chicken buses. 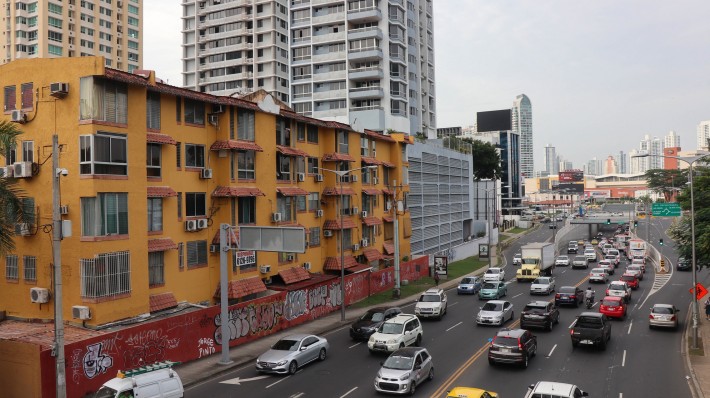 And then we arrive at Colon.

The worst run down city we have ever seen. It must been a beauty end 19th and early 20th century. The fungus remainders of buildings show a faint shadow on what has been. When we stop to have a quick look at the map and take a photo, police on bikes stop to have a chat and escort us to the hotel.

Seems that the government want to convert the whole city to a Free Zone, for in and export. Quite some buildings are already empty but not all, and no maintenance has been done on the remaining buildings. Most of them will be demolished. Lots of people have already been relocated only everything takes way too long and crime is flourishing. Heartbreaking. Part of history will completely disappear.

Room with a view. 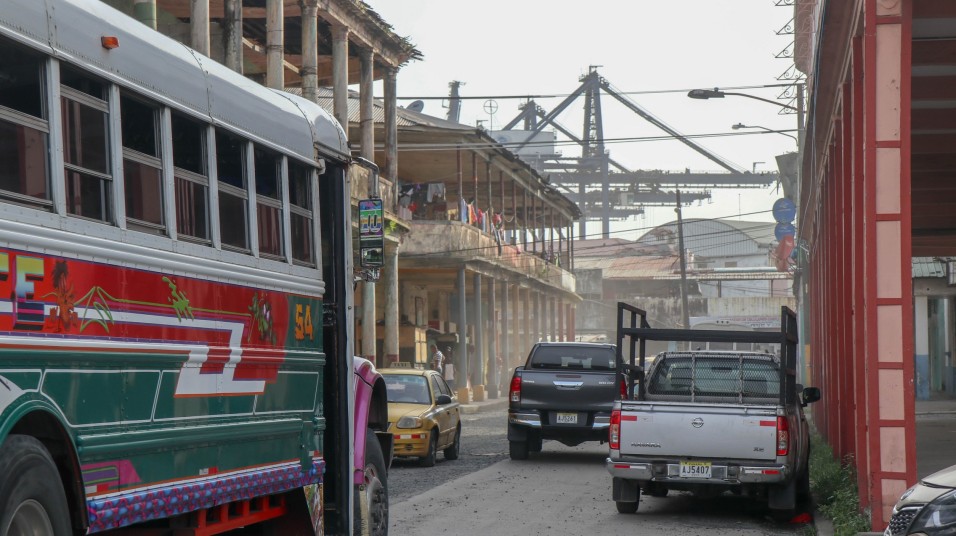 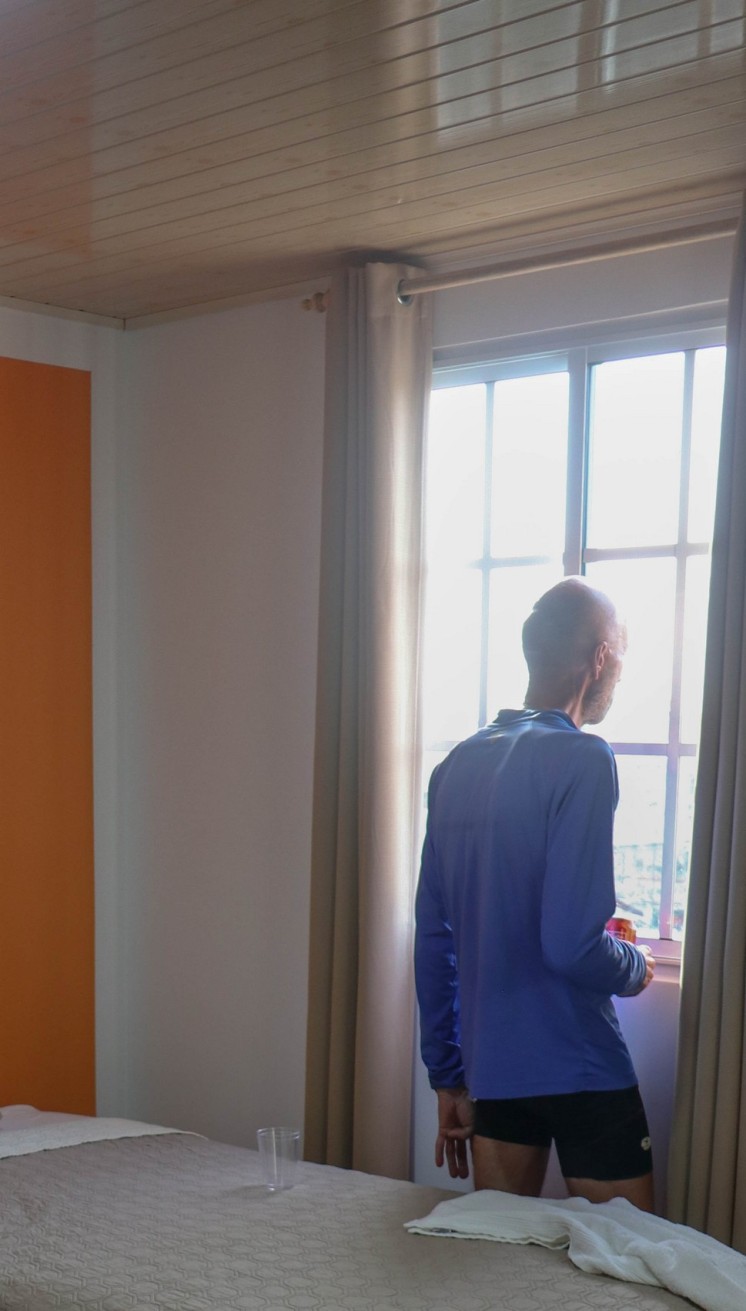 Next day Ans and Henk are taking the bus from Panama so we can visit together San Lorenzo and the Gatun locks. We arrange transport and discover that no data or possibility to call each-other is a challenge when you try to find one an other. Bus station rendezvous is a different location than where they are dropped as last stop. We drive through the city several times as they are walking to try to find us. After almost a hour we finally find each-other. 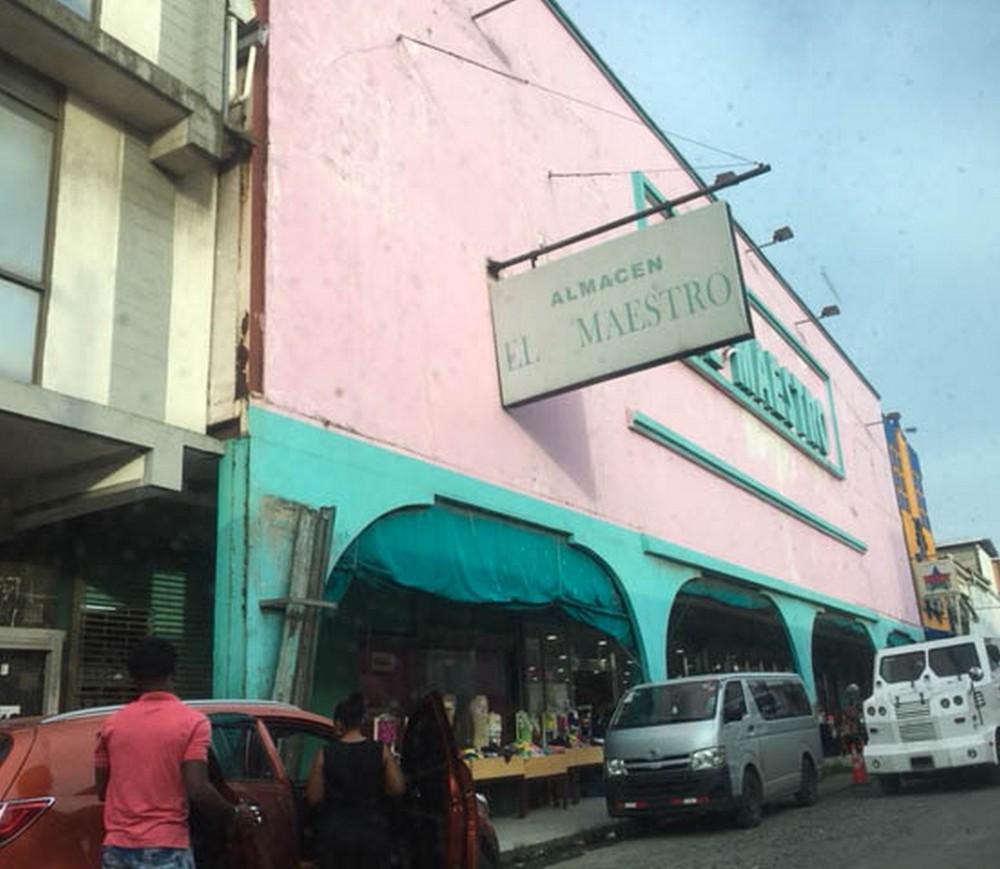 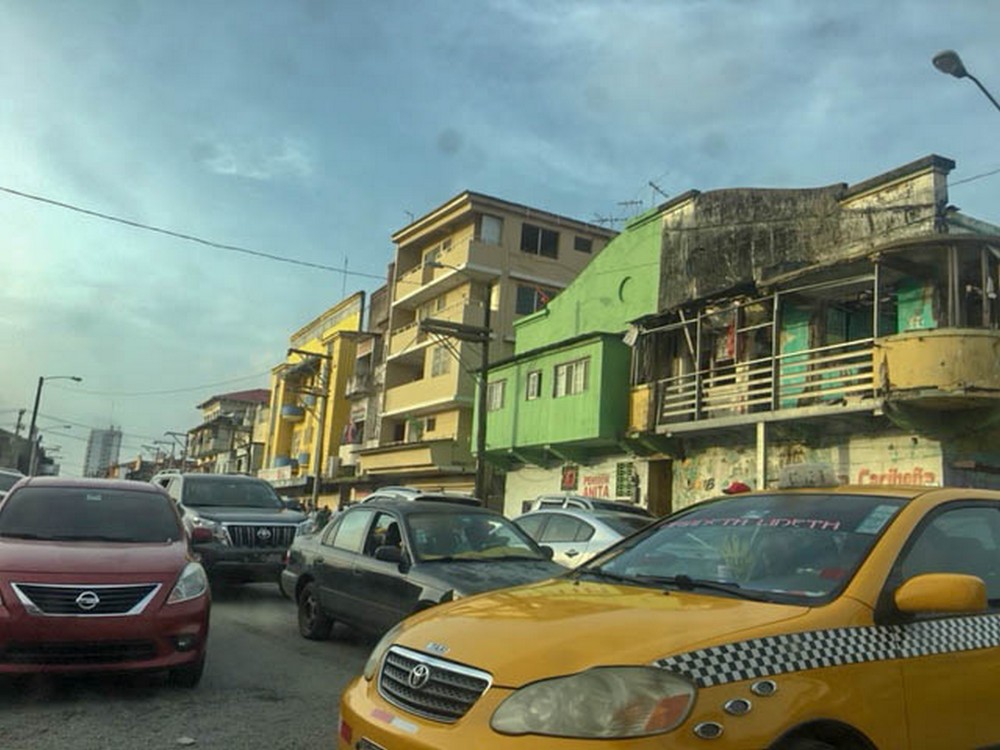 Our driver insists to still go first to the ruins of San Lorenzo, build in the 16th century to defend Panama. Crossing the Panama Canal is fun, but is quite a long long drive over a very bad road. 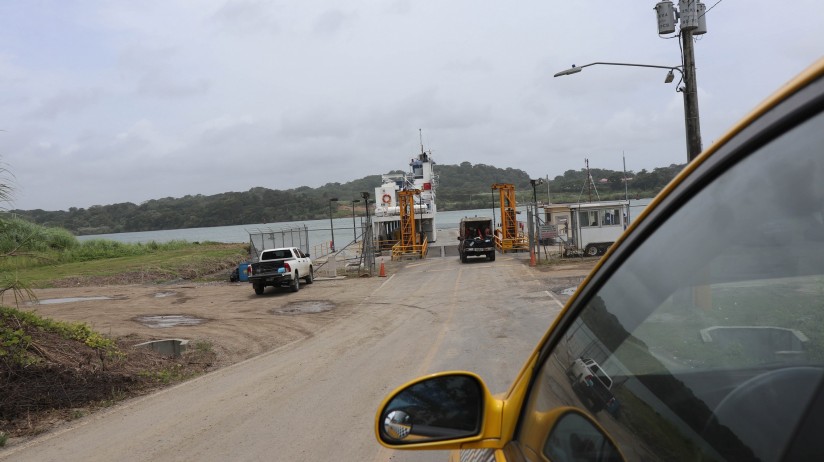 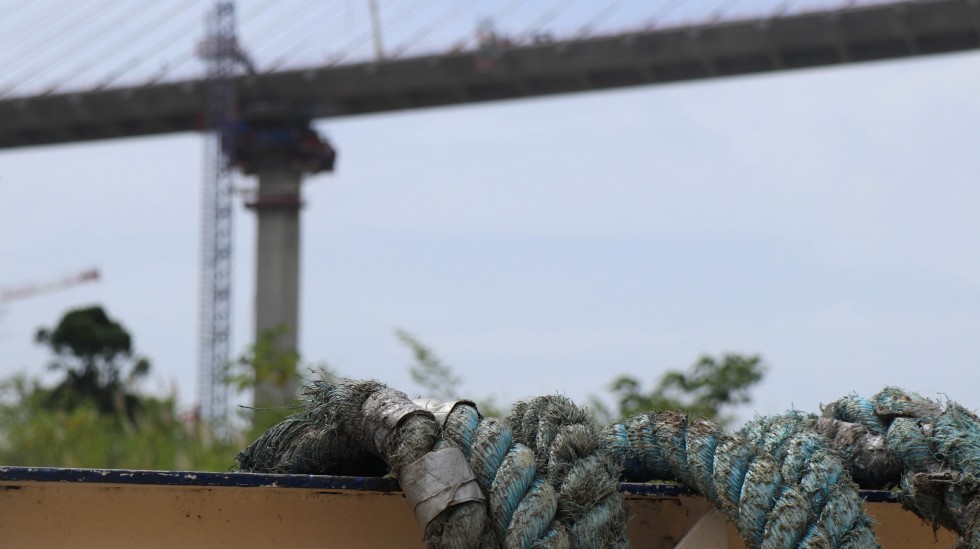 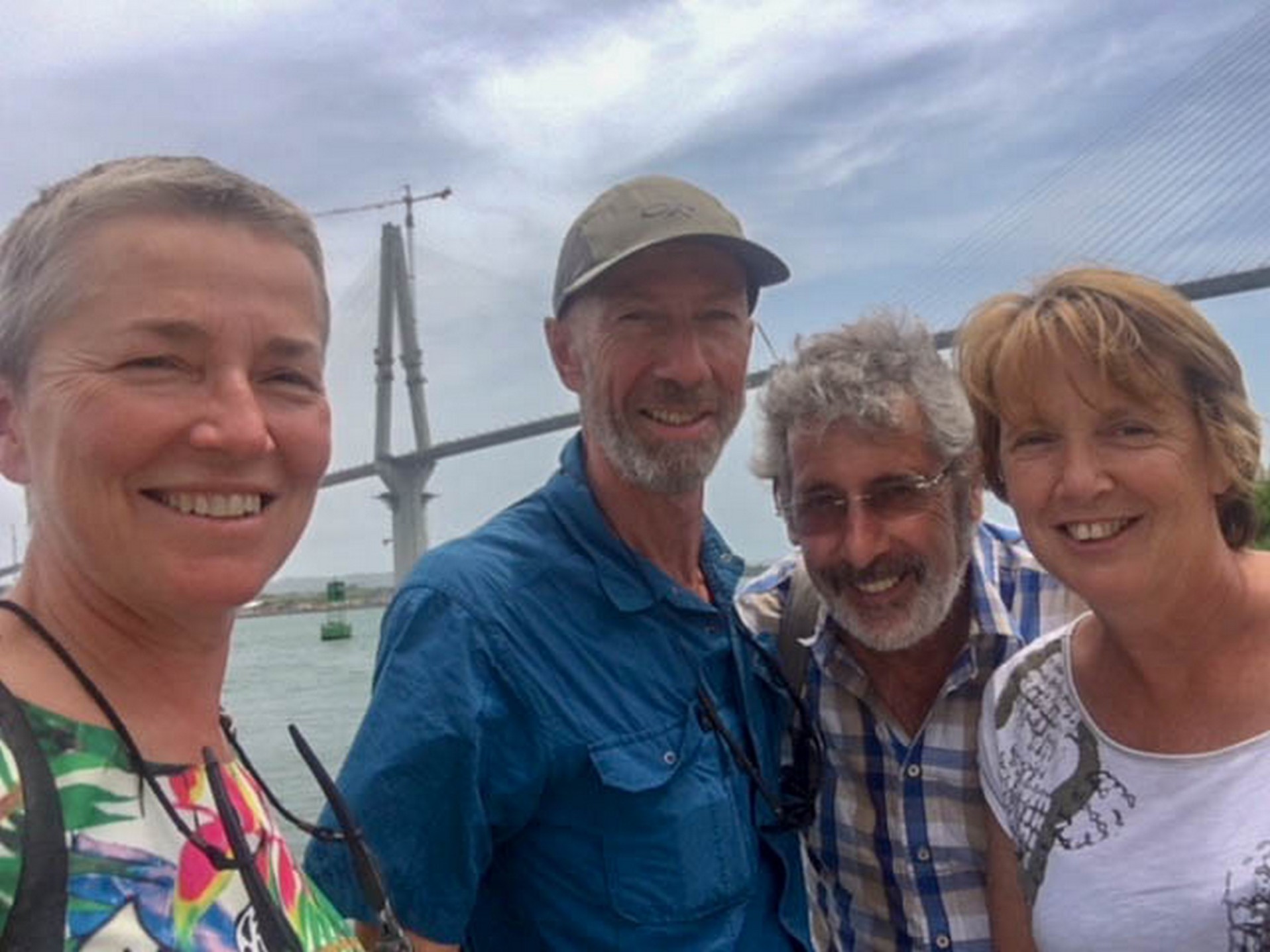 But the ruins, located at the Charges River and Atlantic Ocean are worth the visit. We stroll and wonder how it would have been to defend Panama against the pirates. 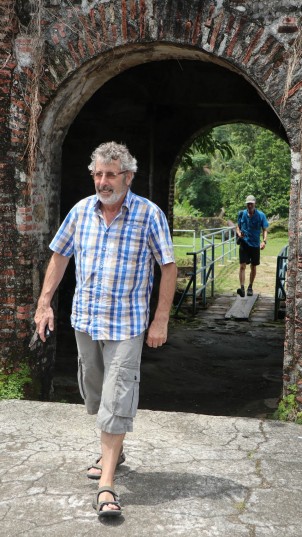 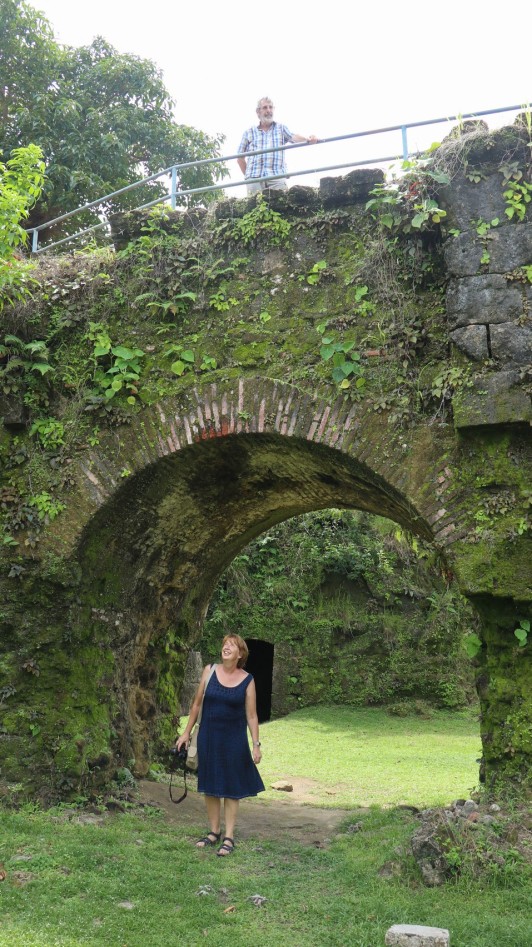 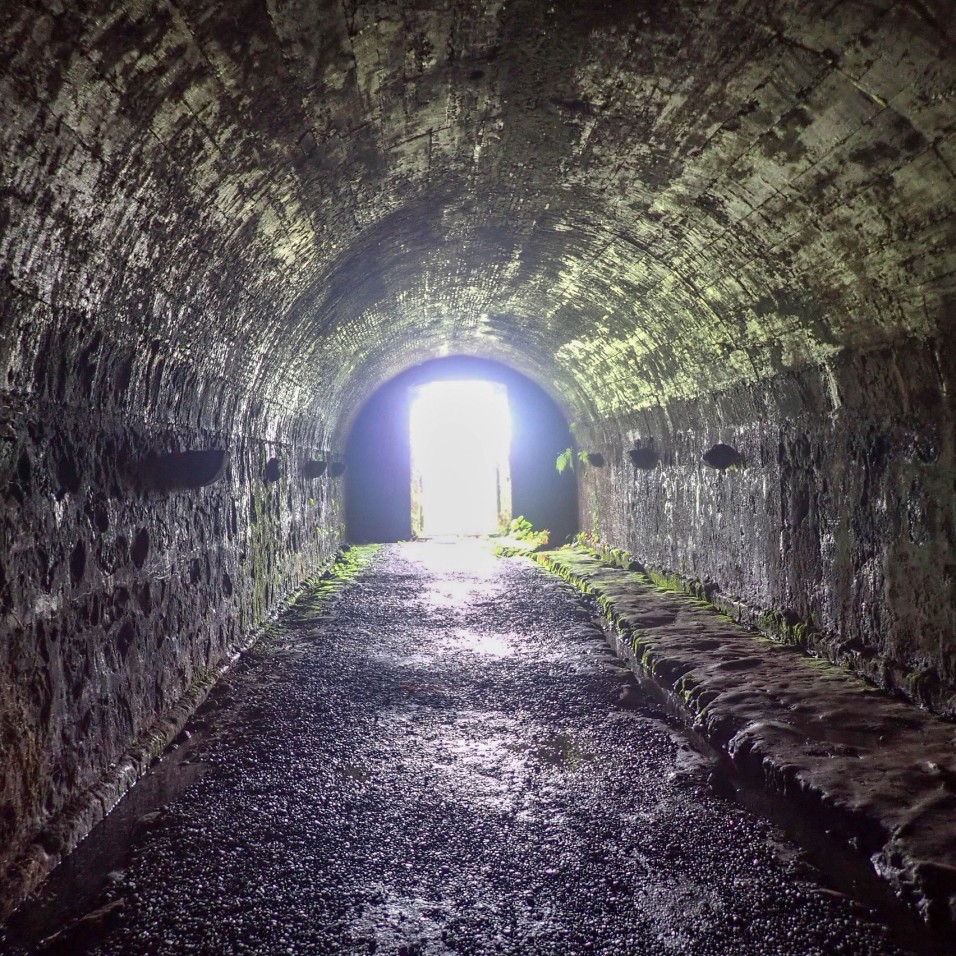 Racing to the Gatun locks to find them closed. What a stupid bummer. We should have gone here first. Stupid as the Google indicates they close at 16.00 but everything is already locked at 15.15.

After a final dinner where we are not allowed to wait outside for the taxi as it would be to dangerous. And a final goodbye, Ans and Henk are heading to Panama City and we go to our hotel in Colon.

On Friday we bike out of Colon towards Portobello. First miles are terrible but after taking the direction to Portobello it becomes a joy, reminding us why we travel by bike. After some searching we find a small, clean, new hotel, with new beds which will be a waiting h(e)aven for the next days until our boat leaves for Colombia. 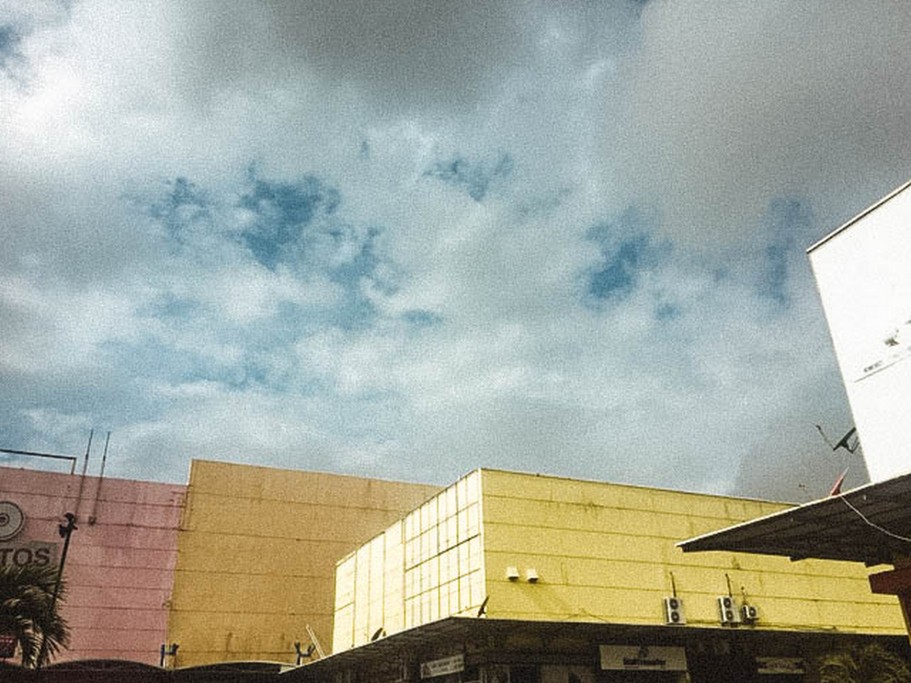 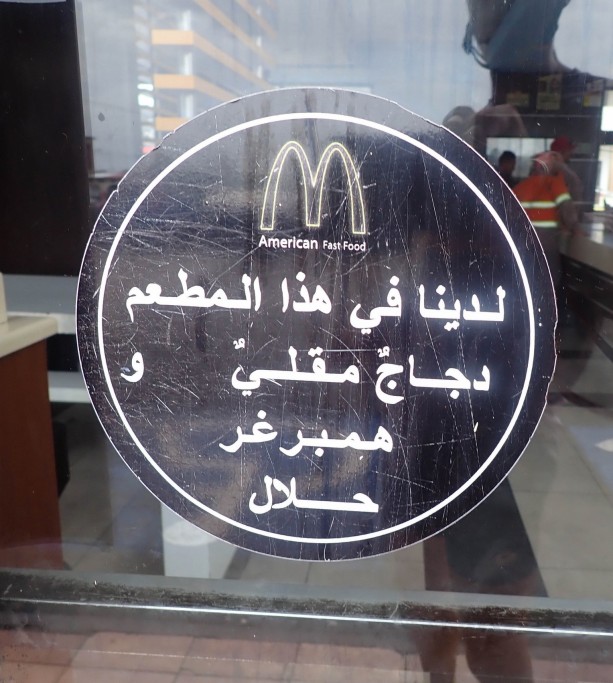 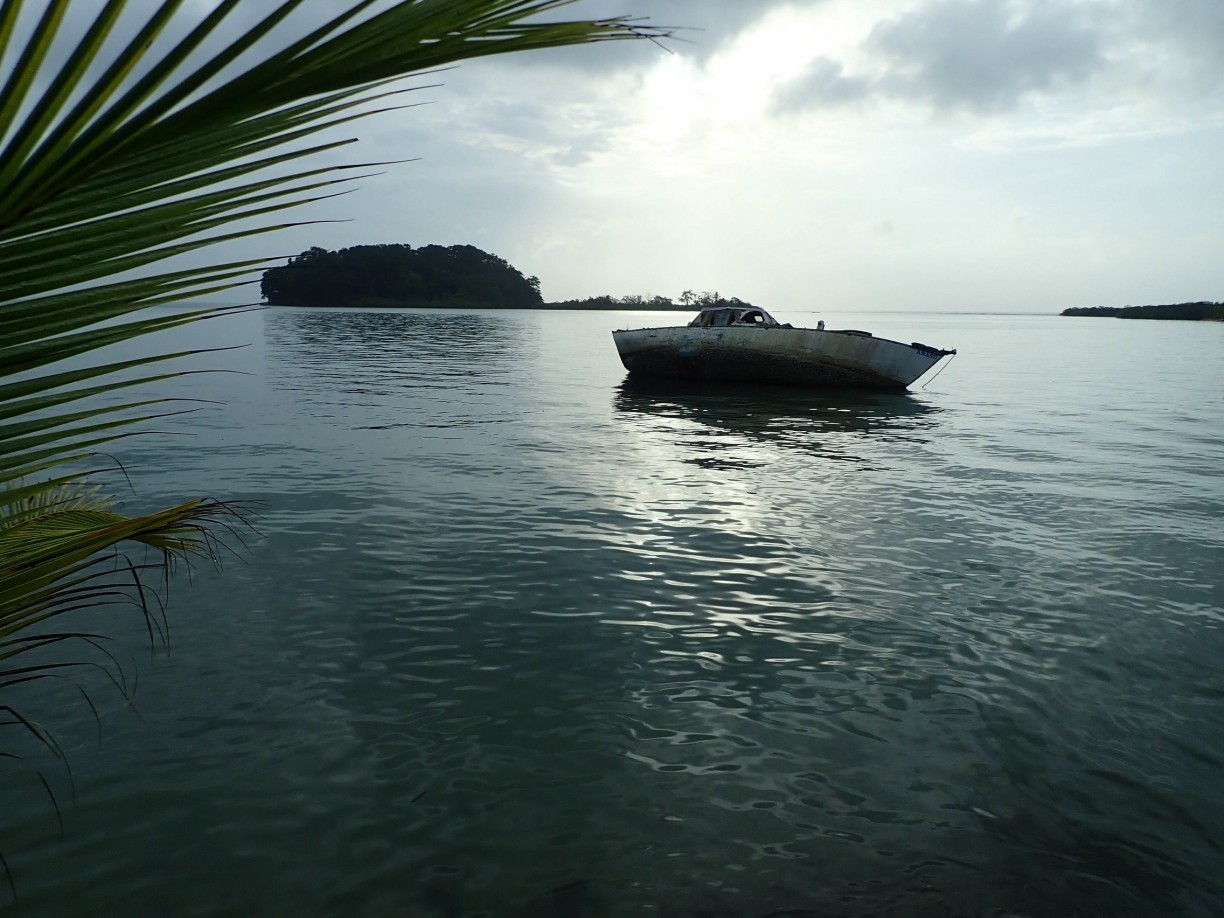 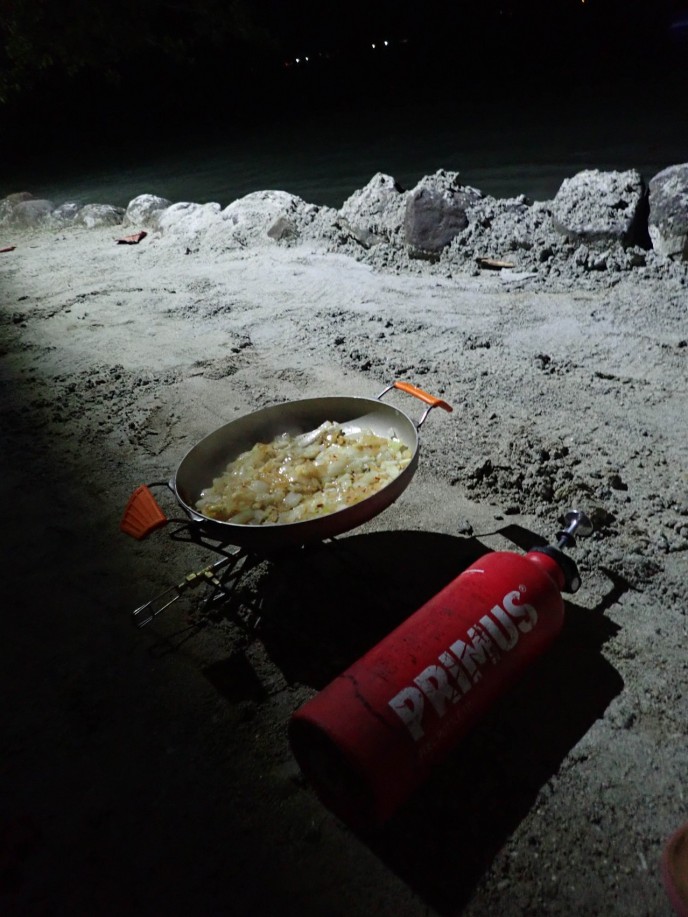 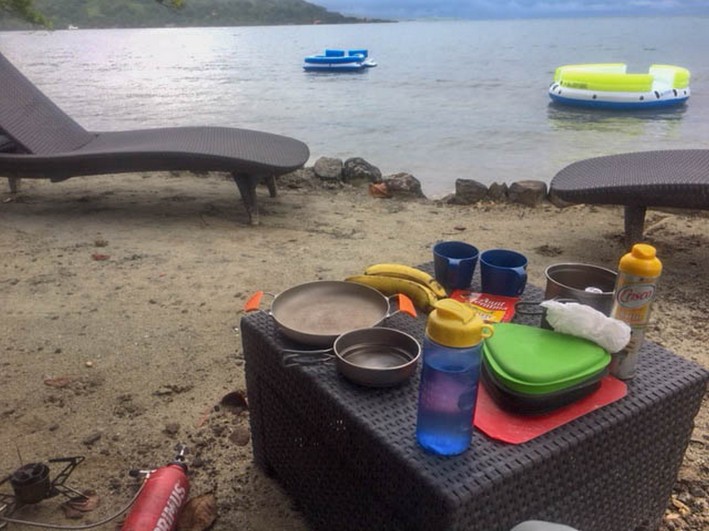 How will I handle the boat trip, being on such vast stretch of water?

Frank (65, Dutch) and Jacinta (54, Belgian) together for 30 years. Biking from North to South America.

One thought on “Week 58. Choletta to Porto Bello. Biking in Panama.”