The advantage of biking in the rain season is that the sky is clouded much of the time, reducing the scalding sun beating down on you. So much water you see the evergreen forest turning even greener. You almost see leaves/grass/flowers grow where you stand.

We won’t talk too much about the downside.

To listen or not to listen?

Remember the mountainbike group we met yesterday who gave us the advice to bike HW27 and not follow the backroads?

Who thought we would skip their advice and still try to bike straight down South via more remote roads (Of course we would says Frank, do we ever do things the easy way?)

We started following 137 which was narrow with some cool, steep, paved descends.

Sharing the road with quite a few other mountain bikers, enjoying the early hours on a lazy Sunday. After Rio Turrubares we turned right and asphalt turned to newly applied grey gravel.

Luckily not all gravel was spread out yet, so biking was doable until elevation was +10%. Here we needed to apply our new skills: push each-other uphill, while the other is biking. After a meagre 3 kilometers, which took us an hour and felt like 20km, a local walked downhill and wondered where we were heading. He was soon joined by an other local driving an off-road motor covered in red mud. Discussion started whether our planned route was doable and safe or not.

As Lolo yesterday already pointed out, it would become even steeper than this and more important, gravel would turn into red mud with very deep tracks. But after 9 km we would face Rio Carara & later Rio Del Sur. Both seem to no longer have a bridge and due to the rain season they also are strongly advised to not cross and use the HW if aim is to go to Jaco. So this time we listen to the locals and returned to almost from where we started. But first we stop at a local restaurant for an early lunch of rice and beans with stew. We were both already hungry like hell. If in vain, it was a beautiful ride!

HW27 has a big sign that bikes are not allowed but we ignore this advice and enjoy an easy ride with a big safe shoulder until exit to HW 34 which will bring us to Jacó.

What we feared is not true, the road to Jacó is not that busy and has enough shoulder to bike in a kind of relaxed way. Of course gravel with no traffic is much more of a joy, but sometimes just not possible. Here you still have trucks or crazy tourists which pass you way too close. But we now at least have decent bridges which bring us safely to the other side of the growing rivers.

At 17.00, when heavy rain starts, we are just at the boundary of Jacó. For the first time we see high rise buildings and ugly too 😦

As we don’t have data on our phone, we stop at a roadside restaurant to check where we will be sleeping. Jesus (not JC, but BJ, whom we met in Angtigua and Ometepe) suggests a hostel which also has private rooms. Glad not having  to search any longer, we check his place. Basic but clean, new mattresses, a good price and a heavy downpour outside make us decide to stay at least for one night. And we have pizza together with Jesus. Fun! 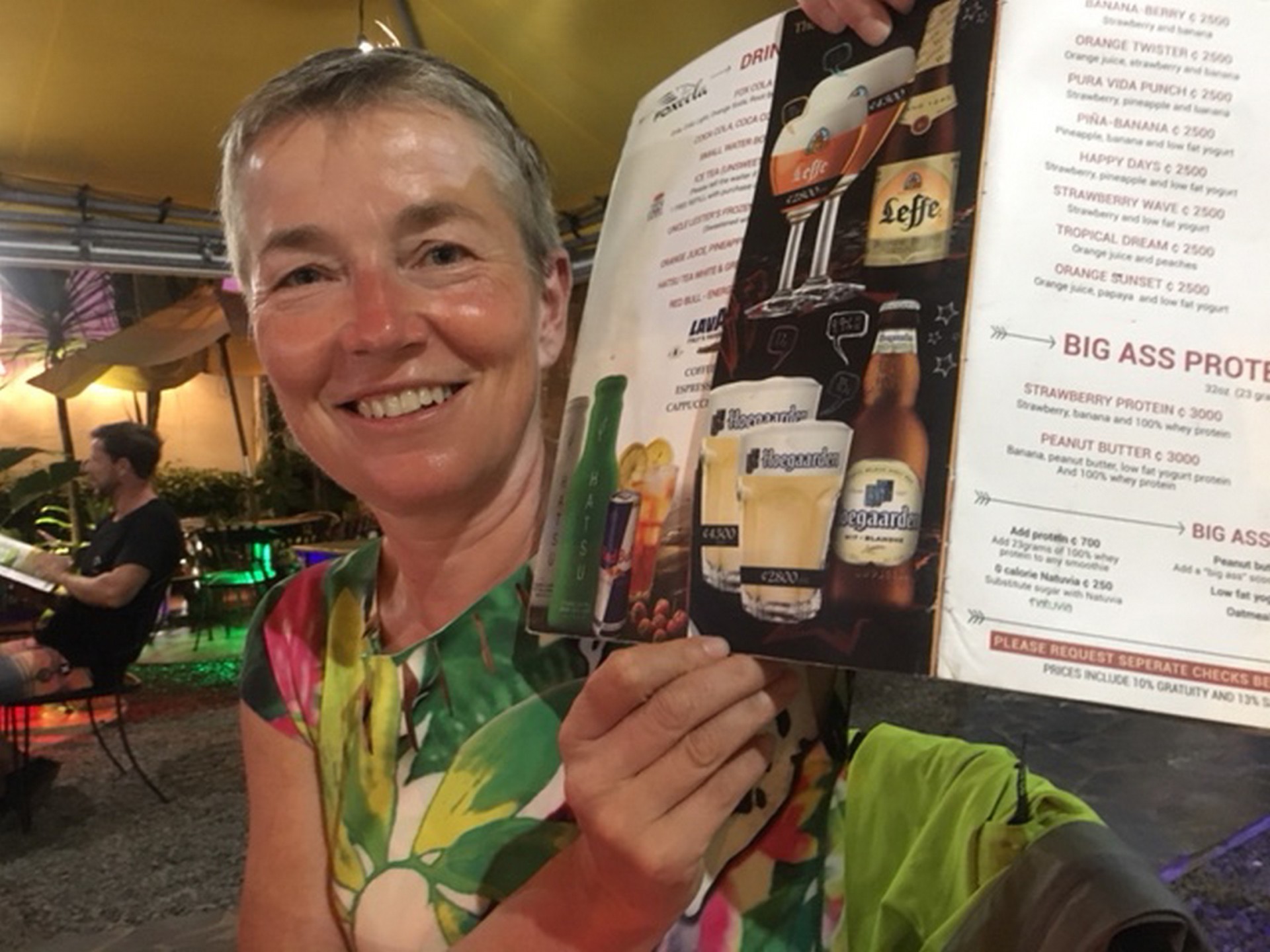 You know it is a tourist town when you see your home town beer on the menu.

Hard music during the night from the nextdoor hostel gives a party town vibe but as we are both tired it did not really bother us. We decide to stay an other night as I want to hunt for a new bikini and we want to work on the blog. First one was no success, even if we are in one of the prime beach towns and even if they have several shops.

For me it feels more like a façade, a décor where people come to play, party and surf. Where there is a varnish layer which should show that it is nice and shiny but looking deeper it feels more like an old USA beach town with hippies and cheap stuff sold at high prices. We also notice that almost everyone seems to have tattoos nowadays.

As world football championship is ongoing and Belgium is playing today I check score in one of the pubs (10 o’clock in the morning) and in the 2 minutes I watch, I see the first goal 😊 We won with 4-1! Did not see the rest of the game as more important things on the agenda.

Our De Haan Hostel has a decent kitchen so there is no discussion if we would go out for dinner or cook our own meal. But first watch a cloudy romantic sunset. 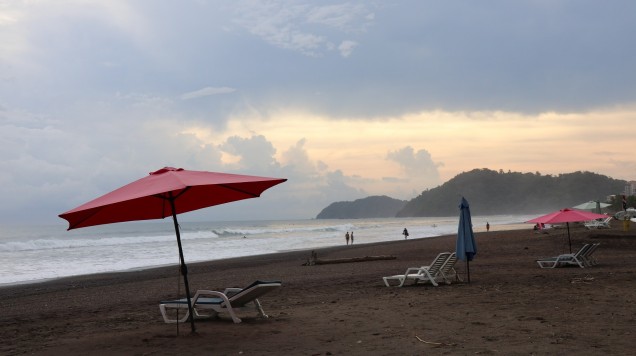 Leaving Jaco is OK even without new bikini, too much partying going on. Even if they should be quiet after 23.00 not all hotels obey the rules. And you know that we are no party animals so… 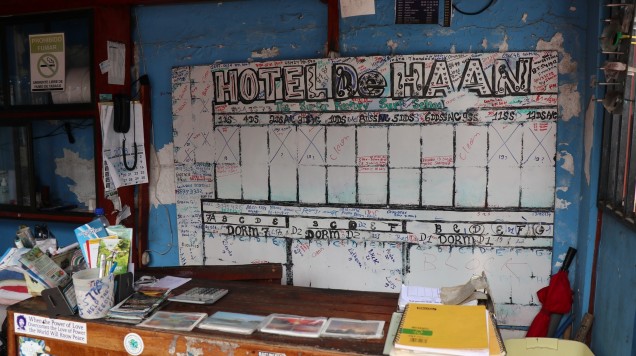 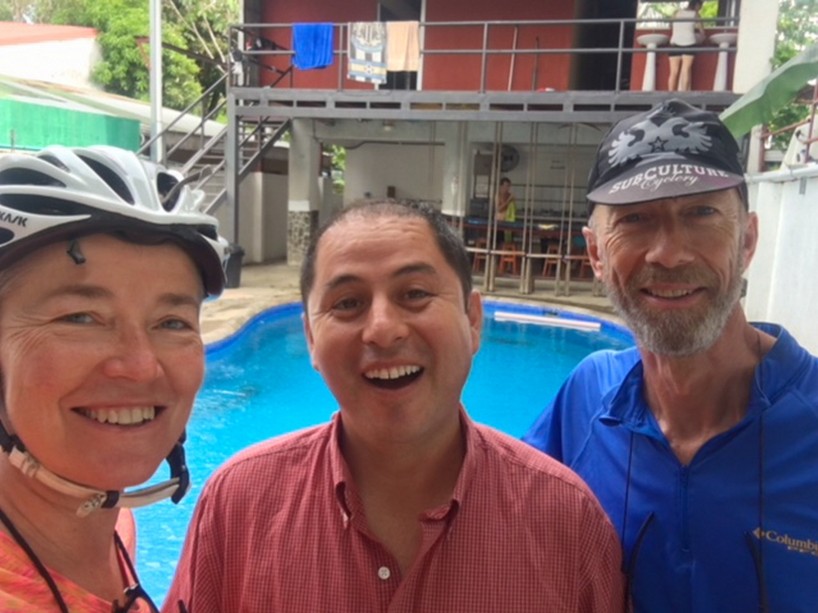 On our way out of Jaco we spot our first wild ara’s, just high in a tree, next to the road. Fun!

To Lodge or not to Lodge.

Ans & Henk, Franks sister and husband have been in Costa Rica in 2013 and suggest Kayak Lodge, which we would pass biking South. They loved the remote setting and balcony wildlife. As this would be an excellent distance for the next day we decide to at least check it out and see if it is affordable. Good stop before Parc National Manuel Antonio. To make a long story short: we have such a nice click with Marlene, the owner, that we stayed 4 nights in a beautiful, large apartment. Bigger than the first apartment we lived in at home. 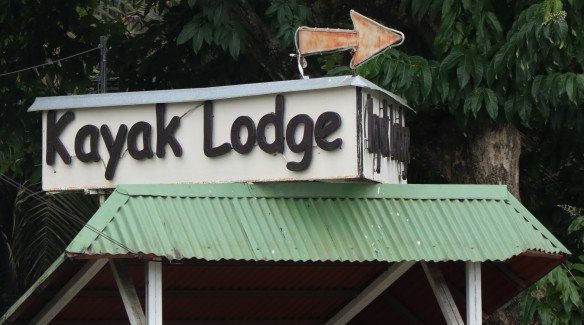 She hooks us up with Maurilio, our guide, not only for a kayak tour in the mangrove forest starting behind our balcony. 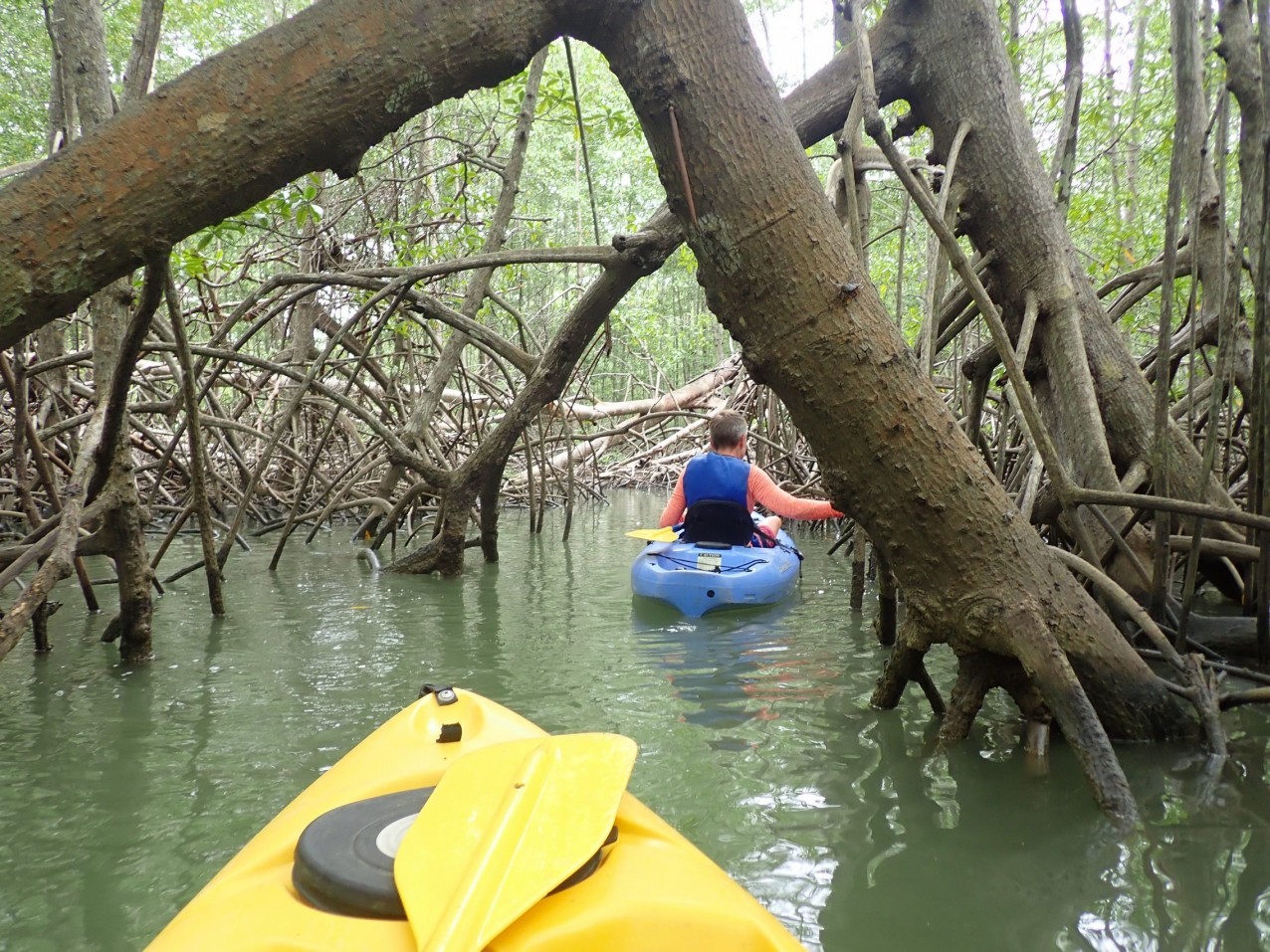 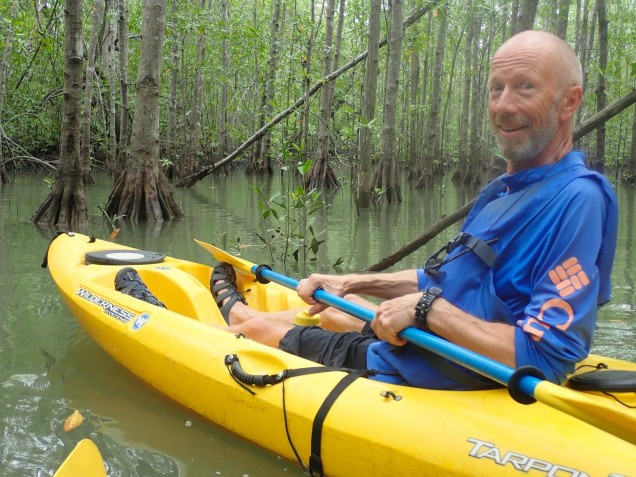 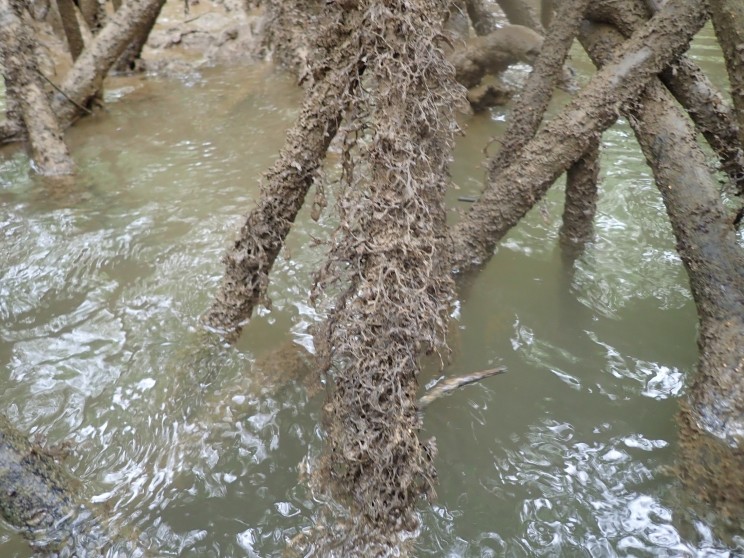 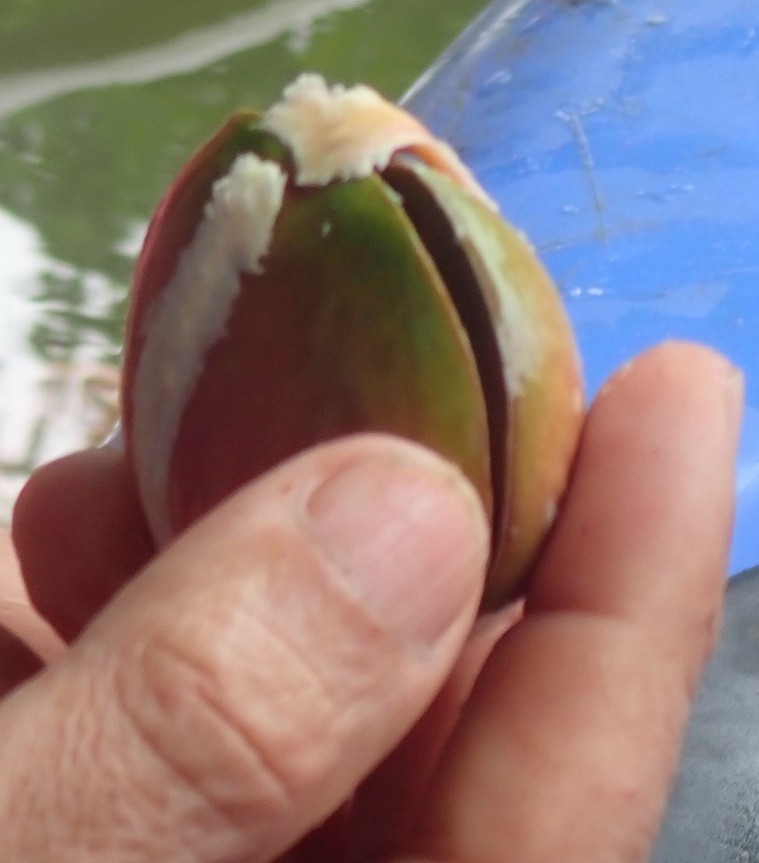 He would also take us the next day on the 7 beaches hike. Leaving from the marina in Quepos, crossing 6 ridges. 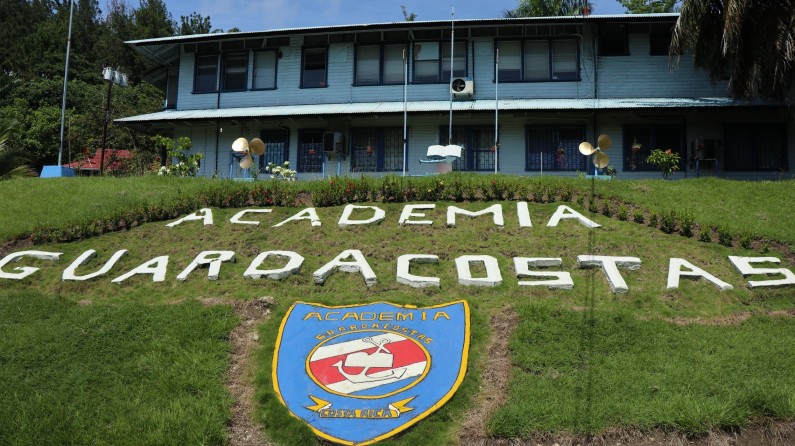 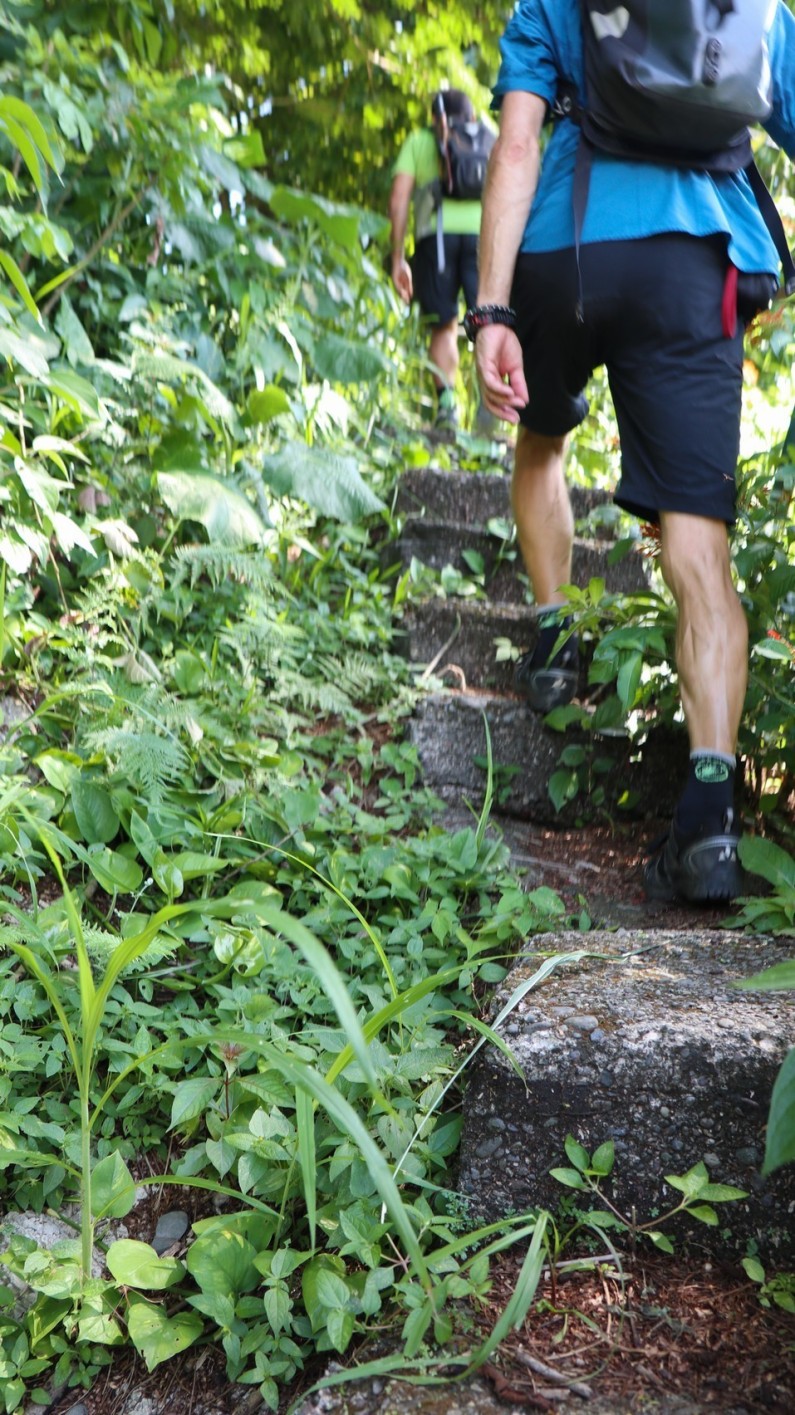 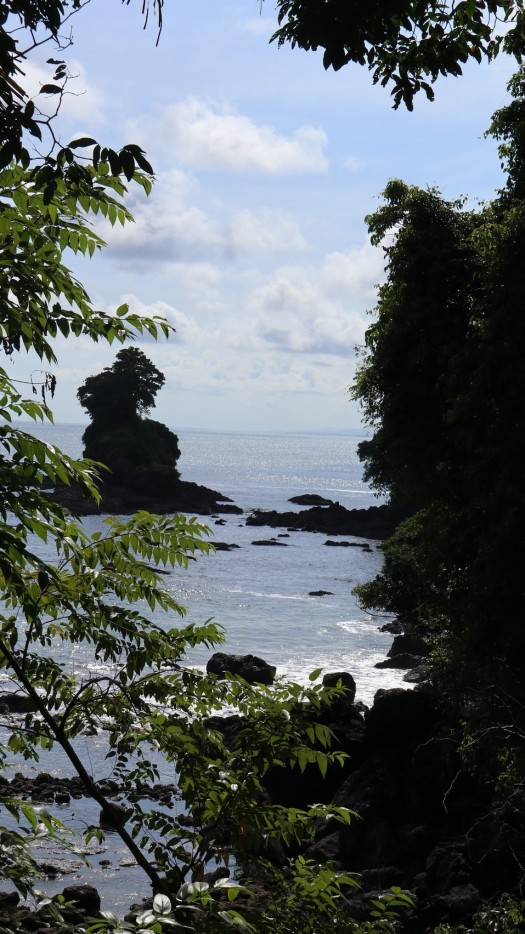 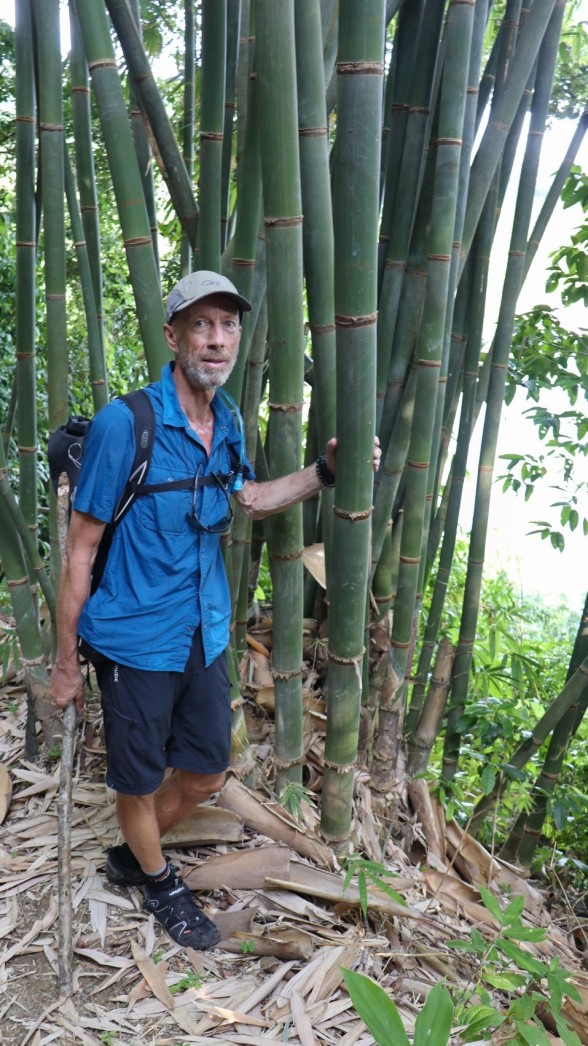 His daughter and her boyfriend have joined and we help each other when it is very steep to descend.

fun to spot sloths, squirrel moneys, snakes and lots of birds together. Ok, we see them after Marilio has pointed them out. No other people, only a few on two of the beaches. 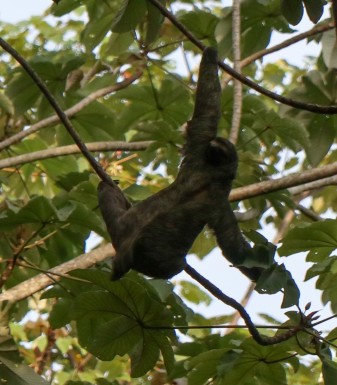 Day 3 is an in-depth tour through Manuel Antonio. Slow, but after each corner, each turning of a leaf, we discover new surprises.

If we would not have had Marilio we would probably only have seen 10% of what we have seen today! We would not have seen all the sloths, snakes, spiders, green/black poison frog, lots of birds and special trees. And we would definitively not have hiked the 7 beaches trail of yesterday alone.

Please contact us for his details if you are looking for a knowledgable, patient, great guide and nice guy! 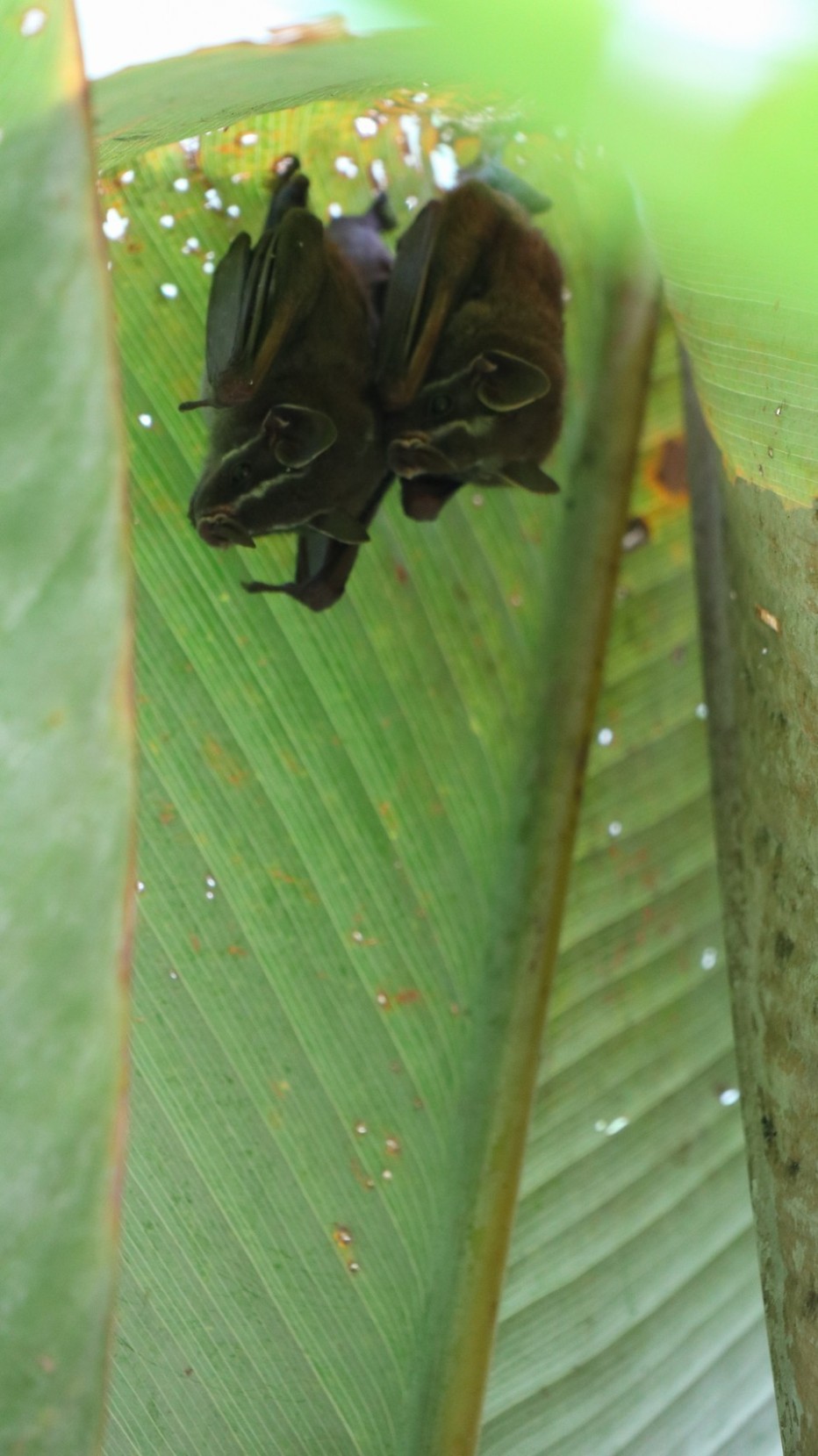 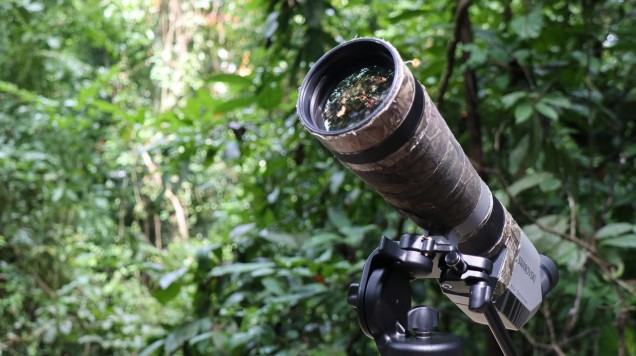 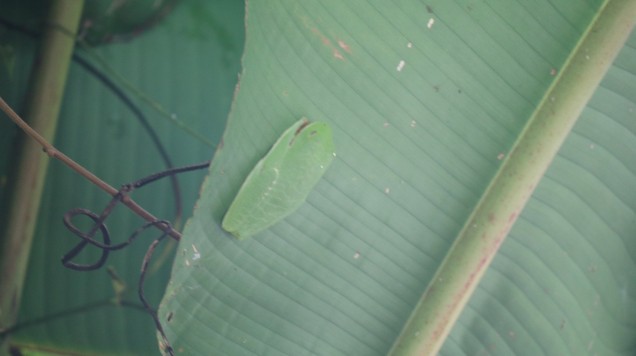 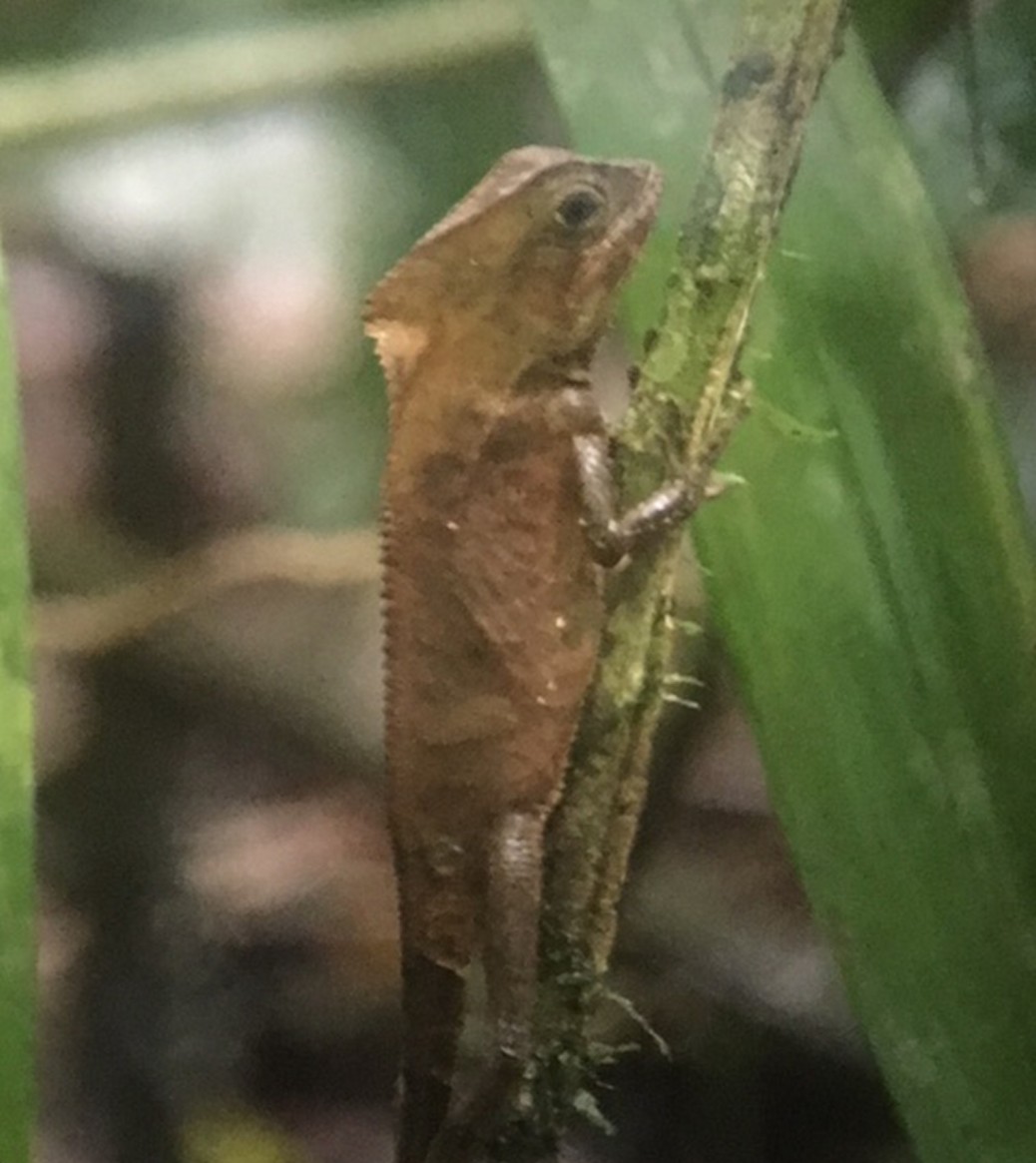 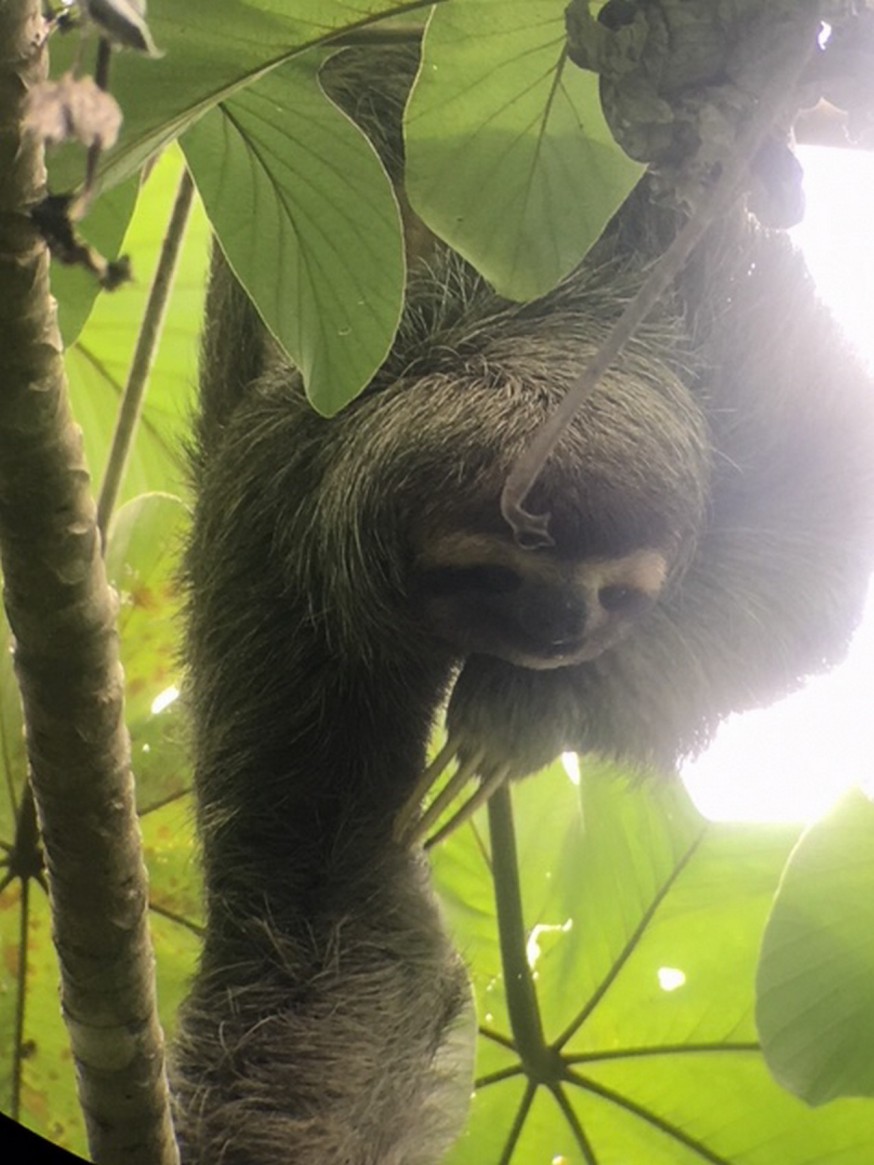 Did you see that the bats created their own house by knacking a bananaleaf?

After a very emotional morning, when first the other two new guests and later Marlene’s nephew Juan Carlos, talk to us about the love of God, it is time to say goodbye to a very welcoming hostess and a great, quiet, friendly place. Marlene’s dad is now 92 but biked until recently, so the bikes need to be admired before taking off. 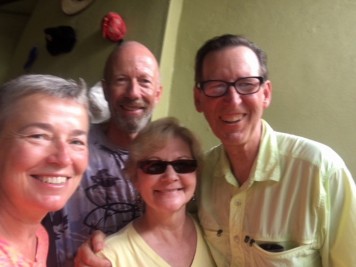 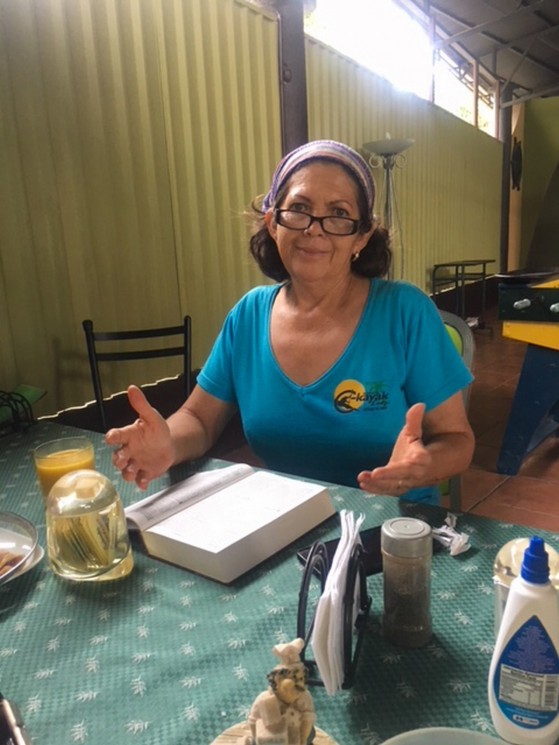 We loved our little heaven with our own group of white faced monkeys, Jesus Christ Lizards  and other beautiful creatures. 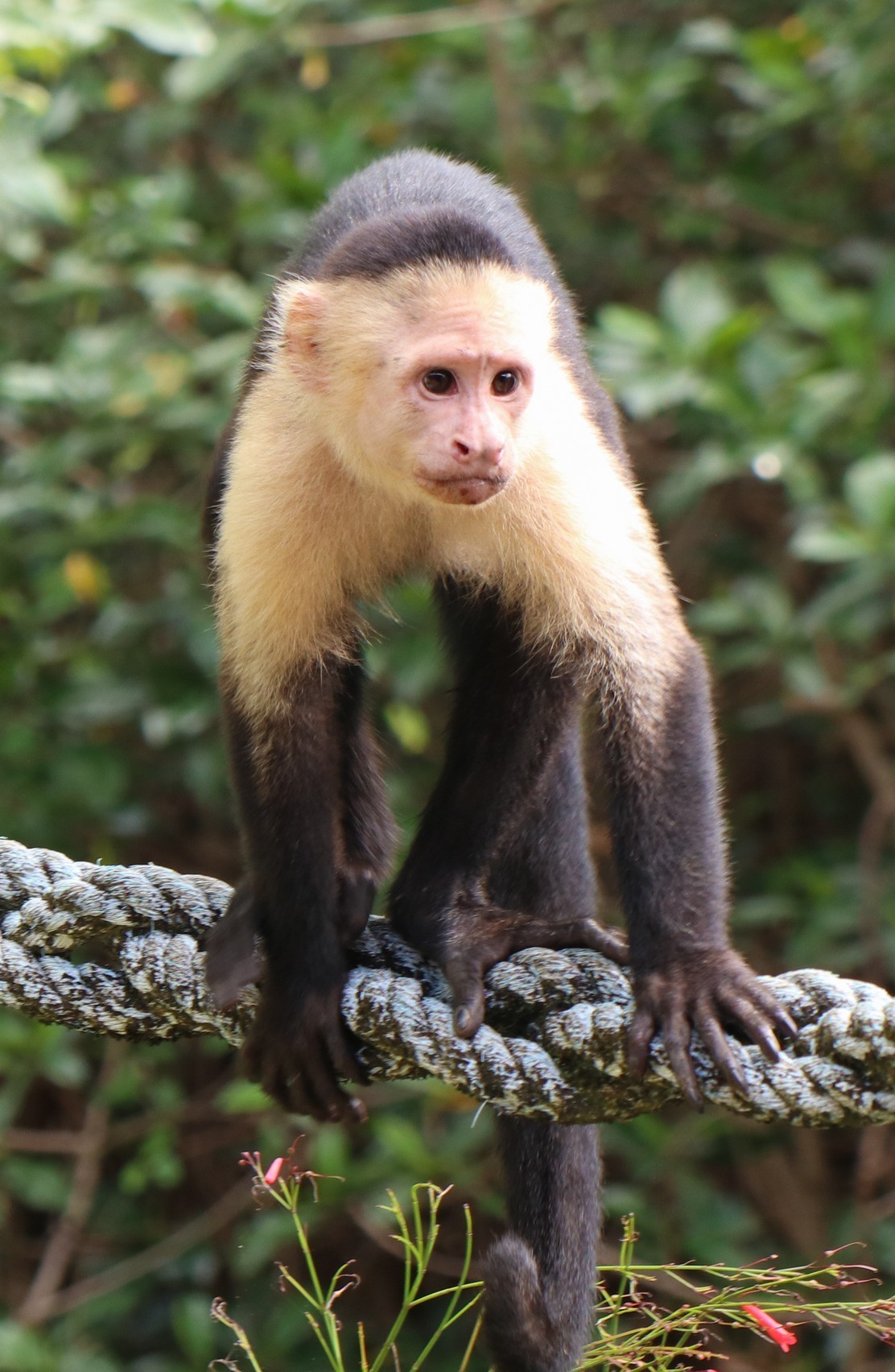 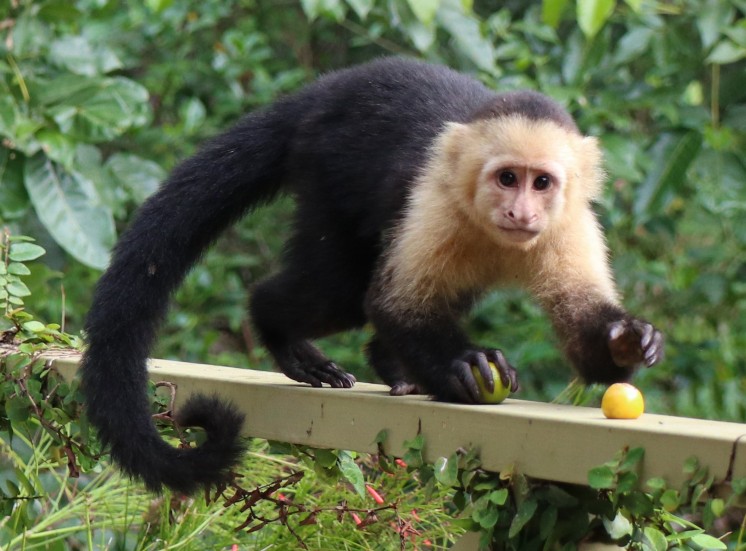 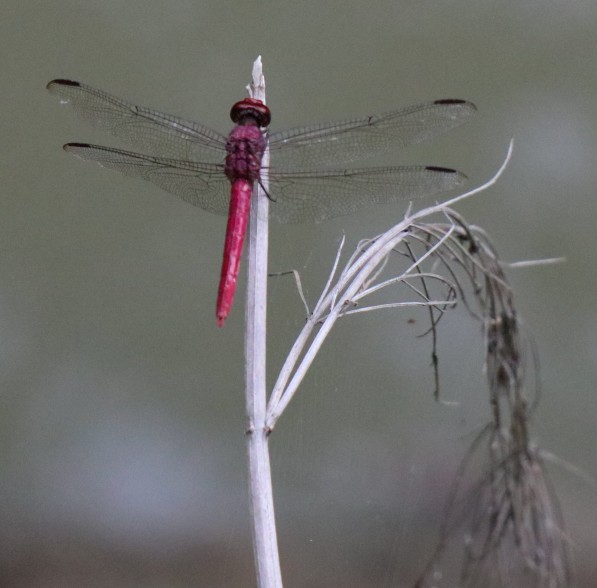 It was heart-warming to have some of the discussions, even if religion has a different meaning in our lives than for the people we talked to here.

As a closure of quite an expensive week we decide to camp in Matapalo.

To cross or not to cross.

After some great backroad riding with two river crossings (without a bridge), we choose a campsite advised by iOverlander which would be very welcoming. 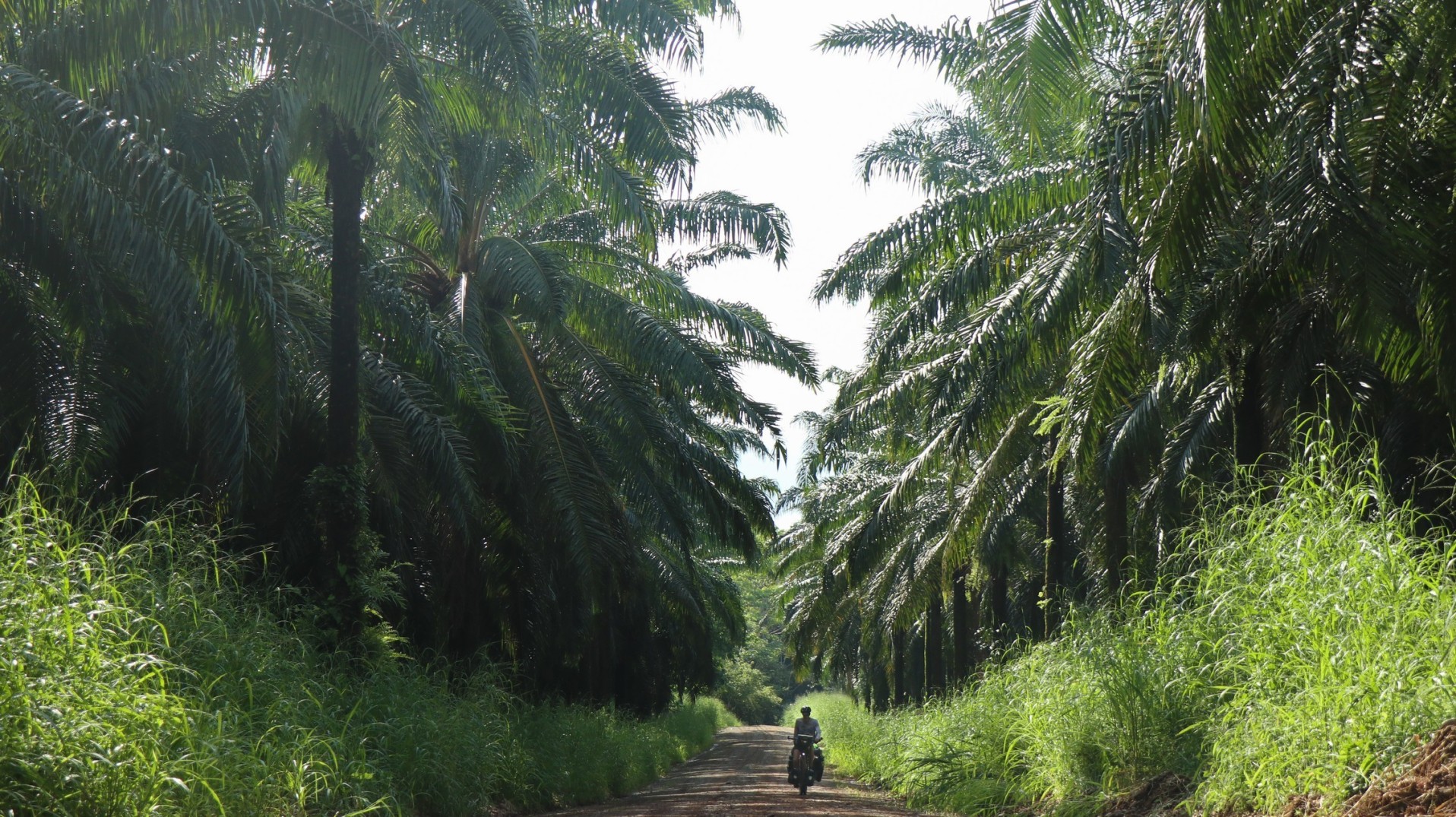 But Charlie runs a business here and as he is in quite a remote area and it is 17.00 with tunderclouds hovering over us, we decide to stay and pay the 18$ for camping, a cold shower, use of kitchen and a dip in the small swimmingpool.

Luckily we are still in the open air kitchen when the area is hit by a horrible thunderstorm, so close that electricity goes out for almost 30 minutes. During a semi dry spell of 10 minutes we race to our tent, find it still at the same spot and the sleeping quarters are still dry. Will we survive in dry conditions this Saturday night? Check out next week blog.

Frank (65, Dutch) and Jacinta (54, Belgian) together for 30 years. Biking from North to South America.

7 thoughts on “Week 54. Orotina to Matapalo. Biking in Costa Rica.”